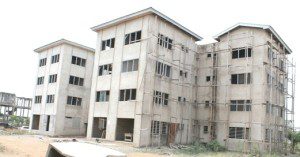 The project, a joint initiative of the Tamale Community Cooperative Credit Union and an NGO – Water and Sanitation for Africa, began in year 2013, but got stalled due to problems with funding. Mr. Alhassan John Issah, Chairman of the Credit Union, said they had successfully concluded talks with the project’s financiers and that all was set for the construction works to resume by June.

Addressing the ninth annual general meeting of the Union held in Tamale, he indicated that everything would be done to ensure the successful completion of the housing units and asked contributors to remain calm.

Mr Issah announced to the meeting that the Credit Union made a net surplus of GHȼ76,568.68, last year, compared with the previous year’s figure of GHȼ63,011.68.

He said its assets also grew during the period while interest payment to contributors went up.

He complained about what he said was the the high rate of loan default and advised offenders to re-pay the monies owed to avoid legal action.