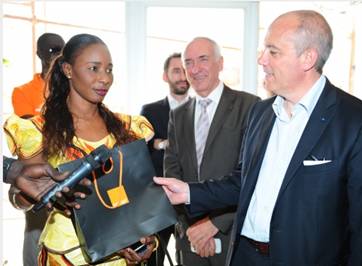 St?phane Richard, Chairman and Chief Executive Officer of Orange gave a bonus to the 10 millionth customer of Orange Money in Dakar, Senegal: Ms Kanny G., who had gone to an Orange Money outlet to open an account, was surprised to learn that she had won a smartphone with an Orange Money credit of 100,000 FCFA (152 euros). ?Orange Money is a revolution in terms of customer experience, and the appeal of this service is the best proof that we made the right choice when we decided to offer mobile payment services in 2008. I am very proud to be in Dakar today to meet our 10 millionth Orange Money customer. While making a strong contribution to economic and social development, mobile financial services also represent a major growth engine in Africa and the Middle East as well as in Europe for Orange,? said St?phane Richard.

Orange Money has seen exponential growth since it was launched. The service is now available in 13 countries: Botswana, Cameroon, C?te d?Ivoire, Egypt (under the name Mobicash), Guinea, Jordan, Kenya, Madagascar, Mali, Mauritius, Niger, Senegal and Uganda. In 2013, more than 2.2 billion euros in transactions were conducted through Orange Money. The ten million mark has just been hit, and in some countries, such as C?te d?Ivoire, more than 40% of all Orange customers have an Orange Money account.

The success of the Orange Money service is closely linked to that fact that it meets strong expectations by people in Africa and the Middle East. It adapts to lifestyles in countries where only a minority of inhabitants have bank accounts yet the majority have a mobile phone. It makes life easier for users every day by giving them a way to keep their money safe or by saving time on all of their transactions.

Subscription to Orange Money is free of charge. After opening their accounts, customers have access to three types of services:

-????????? money transfers, allowing them to send and receive money by phone;

-????????? easy remote payment for goods and services, whether to pay bills from partner companies (e.g. water, electricity or TV service) or to buy airtime;

-????????? financial services enabling them to wire money to and from a bank account, pay wages, etc.

Orange Money is a major source of innovation for the Group, which is broadening its offer by developing an ecosystem of services and partnerships. For example, Orange recently launched several flagship projects:

-????????? Orange Money International Transfer for mobile-to-mobile money transfers between C?te d?Ivoire, Mali and Senegal, which has achieved a market share of 15% in a matter of months;

-????????? a partnership being deployed with Total on distribution and merchant payment in service stations for greater access to Orange Money.

A number of other projects are planned for 2014: the opening of additional corridors for international transfers, the creation of services for customers with bank accounts, and the development of new interfaces for smartphones, which are becoming more widespread. Moreover, the Group is continuing its efforts to build up its distribution network, especially in the most remote regions, as proximity is a key success factor for Orange Money.

Orange?s ambition is to support the anticipated growth of the mobile payment market in the coming years. The Group also plans to expand its range of affordable financial and banking services and give as many people as possible access to them. Its objective is to turn them into indispensable services in the years to come, just as voice services, text-messaging and Internet access are today.

Distributed by APO (African Press Organization) on behalf of Orange.