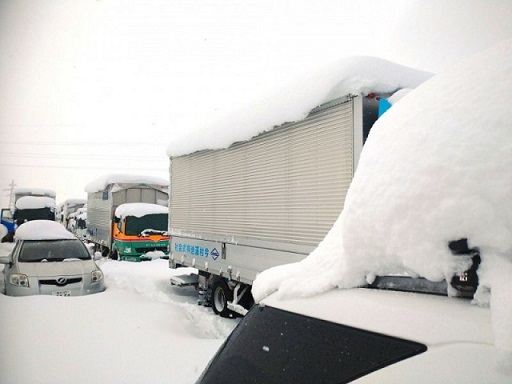 About 1,000 cars were stranded in a massive snowstorm in eastern Japan on Thursday as a cold air system dumped much snow in the region, local media reported.

The number of vehicles stuck on a snowy Kan-Etsu Expressway between Tsukiyono town and Yuzawa town, north of Tokyo, rose to about 1,000, Kyodo News reported.

One driver told broadcaster NHK that he and his colleague in the car had been stranded in heavy snow for nine hours.

“The problem is we cannot go to toilet,” he told NHK. The fresh snowfall pushed the snow accumulation to 181 centimetres in Yuzawa and to 88 centimetres in the city of Uonuma, according to Kyodo.

About 200 vehicles had also been temporarily stuck in heavy snow on the Joshinetsu Expressway in central Japan.
The Japan Meteorological Agency warned of avalanches and further traffic disruptions in eastern and central Japan and Sea of Japan coastal areas as more snow is forecast for wide areas of the country.