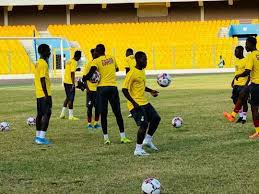 Thirteen Black Stars players turned up for their first training session at the Accra Sports Stadium ahead of their 2021 African Cup of Nations (AFCON) qualifier against South Africa at the Cape Coast Stadium on Thursday November 14, 2019.

According to technical handlers of the team, the rest of the playing body who are billed to touch down in Ghana later would join the team’s residential camp base in Cape Coast on Tuesday, as they prepare for their first double header against the Bafana Bafana of south Africa before travelling to play Sao Tome and Princepe.