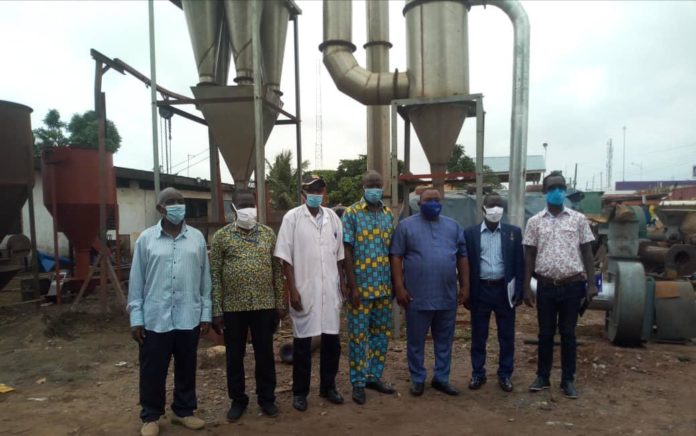 Mr Godwin Edudzi Yao Effah, the Municipal Chief Executive (MCE) of Keta, has said a Cassava Processing Factory under government’s One-District-One-Factory (1D1F) project would be ready by September, this year.

He said government was committed to partner the investors, Hormeku Engineers and Planners (HoPE) Limited, to inject the needed capital to ensure the factory was ready in two months.

Mr Effah gave the assurance on Friday when he led a delegation from the Assembly on a day’s tour of the project site of HoPE Ltd, in Ashaiman, in the Greater Accra Region, to inspect equipment for the Keta factory.

The team later visited Tsiame-Dorveme in the Keta Municipality to inspect the project site and outgrower cassava farms, which would feed the factory on completion.

Mr Effah was impressed about the commitment of the investors, who had locally manufactured the machinery, saying with the equipment and availability of water and electricity at the site, the factory was almost ready.

He said the Assembly would facilitate work on the physical structure, including the fence wall and overhead shed on its five-acre land for operation to start in October.

Mr Abubakar Sheini, an engineer with HoPE Ltd, said the factory, when completed would process cassava produced in the Keta Municipality into cassava derivatives.

He said the factory would transform cassava production from subsistence farming into a commercially viable agribusiness so as to address rural poverty by bringing the community into mainstream economic activity.

He said the plant would have the capacity to process 35 tonnes of fresh cassava per day and noted that the current 65-acre cassava farm under the project would not be enough to supply raw cassava to the factory.

Mr Sheini entreated residents of the communities within the Municipality to engage in large scale cassava production to ensure a regular supply of raw material.

Mr Kofivi Hormeku, the Director of HoPE, declared his revolve to partner government to operationalise the Keta factory to provide about 120 direct jobs and some 1,500 indirect jobs.

Hormeku Engineers and Planners Ltd, which is into the manufacture of food processing equipment, agricultural machinery and general metal works was founded in 1971 and incorporated as a limited liability company in 1986.