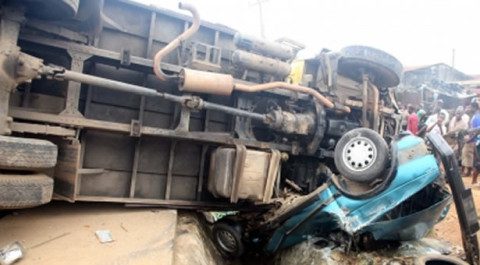 Two persons died on the spot, while four others sustained various degrees of injuries, when a Mitsubishi Canter truck ran into a provisions shop at Agona Swedru. The deceased were identified as Mrs Beatrice Otabil, 55, the shop owner, and Ebenezer Asabir, 42, driver in charge of the truck.

The four who got injured, were Madam Elizabeth Arhin, 57, who came to buy items from the shop, Kojo Mensah, the driver?s mate, Emmanuel Inkoom, 32, and Mr Ebenezer Kwarteng, 33, both on the vehicle.

Superintendent of Police, Ebenezer Ewudzi Sackey, Acting Agona Swedru Divisional Commander of the Motor Traffic and Transport Department (MTTD), made these disclosures to the Press at Agona Swedru.

Supt Sackey said, the accident occurred when the driver who was negotiating a sharp curve, lost control of the vehicle and plunged into the shop, killing the owner instantly.

According to the MTTD Divisional Commander, the driver also died after being pulled out from the mangled truck by Police personnel who got to the accident scene.

Supt Sackey stated that police investigations have revealed that the driver and three other occupants were traveling from the new Sawmills, opposite the Swedru Senior High School, to Agona Nyakrom, to pick sawn timber when the accident occurred.

The MTTD Commander said Miss Angelina Otabil, daughter of Mrs Otabil, the deceased, who was at the shop at the time of the accident, miraculously escaped death.

Supt Sackey said the four who sustained injuries are currently on admission at the Agona Swedru Government Hospital, and that .the bodies of the deceased, have been deposited at the morgue of the same hospital for autopsy.