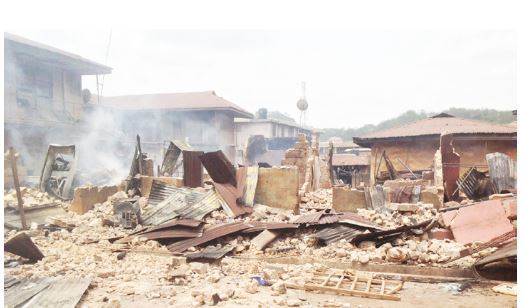 Over 20 households have been rendered homeless and few others displaced following a fire outbreak that gutted a 17-room residential building, situated at No.13, Awolowo Street, very close to fire service office, in Abakaliki, Ebonyi State.

Also properties worth millions of naira, which include eight shops of different kinds attached to the building were destroyed by the inferno which was caused by electrical fault.

Other items destroyed by the fire which was said to have started around 9.00 am on Thursday, include; refrigerators, electronics, furniture and other household property.

One of the victims of the inferno, Michael Nkwegu told our correspondent that there was power outage in the area and no sooner than the light was restored, there was a loud noise from the roof and before they could know what was happening, fire had engulfed everywhere.

?Before we know what was happening, fire had engulfed everywhere and we started seeking for way to quench it. The most annoying thing is that we were helpless; there was no water while fire service officials could not come to our rescue even though their office is just a stone throw from the scene.

?The fire service officials complained that they don?t have water to put off the fire??, he said.

Nkwegu, however called on the government and public spirited individuals to come to their aid adding that the inferno has brought untold hardship to the people as many of them were stranded along with their families.

Residents of the area had marched to the fire service office located along water works road to register their grievances over the attitude of the officials.

But for the quick intervention of policemen, there would have been breakdown of law and order as the protest later turned violent following a clash between the fire officials and the protesters.