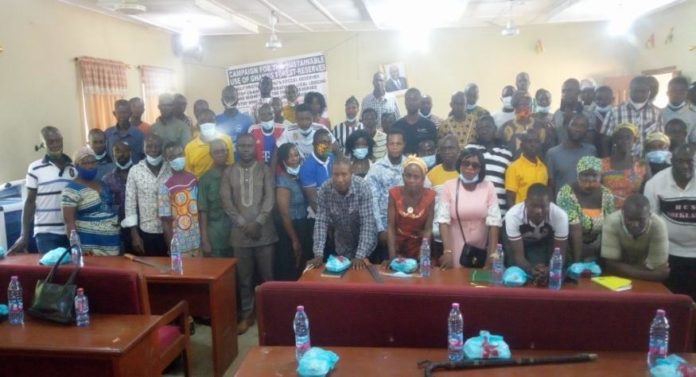 A 20-member Community Forestry Protection Guard (CFPG) to safeguard forest reserves in the Ashanti Region has been inaugurated.

The Livelihood and Environment Ghana (LEG), a non-governmental organisation, in collaboration with the Forestry Services Division, and the University of Energy and Natural Resources (UENR) inaugurated the Guard.

At a forum at Nyinahin, Dr Daniel Akoto Sarfo, a Senior Lecturer and Head of Centre for Climate Change and Gender Studies at the UENR, Fiapre, near Sunyani, said sustainable forest management continued to be a major challenge in the country.

However, sustainable forest management had seriously been challenged by climate change and human activities such as hunting, illegal lumbering and mining, and bushfires.

Sustainable forest management and preservation, he explained, had enormous benefits for present and future generations.

He told the guards that the task ahead was enormous and urged them to work hard and support the local forestry officials to protect the reserves.

Mr Richard Adjei-Poku, the Executive Director of LEG, expressed appreciation to the Womadix and Global Green Grants funds for supporting the campaign to sustainably manage the forests.

Despite those benefits, he said in the last five decades Ghana’s forest resources continued to suffer serious anthropogenic attacks, which included bushfires and wildfires, illegal chainsaw operation and mining.

Established in 2004, the LEG, an environmentally centred NGO, works to address growing environmental threats in mining communities and had since expanded to 34 communities in Ahafo, Bono, Ashanti, Western North, Eastern, and Western South regions.