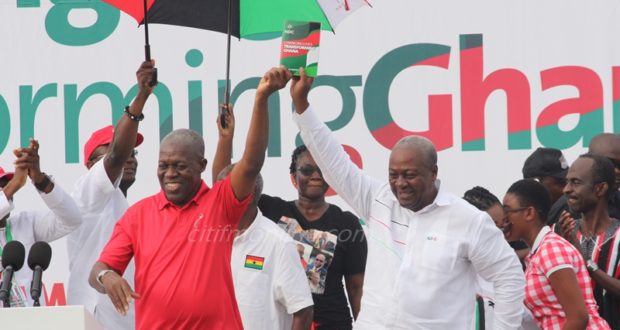 The Dr. Kwasi Botchwey committee set up by the NDC to review the NDC’s performance in the 2016 elections has obviously generated debate and controversies on its findings on factors that contributed to the NDC’s loss, and has come up with recommendations for the party going forward. It has also offered opportunity for the NDC to look into its mirror to get a true view of the various dynamics that were at play in the party and as to how to manage them for the success of the NDCgoing forward.

Some of the issues then at play related more to internal issues that played a role in the party’s loss, and are definitely relevant in any analysis of the causes of the party’s loss in election 2016. In this regard issues relating to party unity and the NDC’s organizational strategies for the 2016 elections are very relevant. It is very easy to point to disunity as a cause of the NDC’s loss and cite various instances to support this position; however the fact that the NPP was more disunited than the NDC going into election 2016 and yet won the 2016 election convincingly, indicates that the unity factor may be an overplayed card in the dynamics of factors that significantly featured in the NDC’s loss in the election. Indeed, it is undeniable facts that for as long as political parties continue to be entities with diverse constituents and personalities, total unity would continue to elude all of them. The key is for parties to effectively manage their internal blocks and factions such that issues that generate disunity do not divert them from the main focus of winning elections. Indeed an effective organizational strategy for winning elections appears more important than the over flogged issue of party unity that some have cited for the NDC’s loss in election 2016.

Did the NDC have an effective organizational campaign strategy for winning election 2016? Obviously not, as per the results of the elections. In this regard, the NDC’s communications strategy very much comes to light as compared to the NPP which had a communications and that worked to near perfection. The NDC therefore needs to do a comprehensive review of its media and communications strategies going forward if it is to succeed. In an era where the average Ghanaian, be it on the farms, in the offices, at markets, in residences, and in most remote corners of the country is glued to radio and TV stations for most parts of the day, it is suicidal to go into elections in Ghana today without an effective strategy for getting your message across on all radio, TV and media outlets in the country.

Indeed, you can execute most of infrastructure projects across the country, however if you lack an effective strategy for communicating your work and its relevance to the people and their communities, you would not be credited with doing much for the people. This was largely the situation of the NDC in election 2016.

The obvious strategy employed by the NPP was to ensure that the negative issues of the day dominated discussions on media outlets, not the schools, hospitals,, airports, interchanges, asphalt roads and factories that were being constructed by the NDC. Again, on communications, the role of the social media has also assumed significant relevance in elections management strategy and need to be taken seriously by the NDC going forward. Hopefully, the Dr. Botchwey’s committee has reviewed the overall communications strategy of the NDC in the 2016 elections and recommended a better strategy for improving upon an obvious achilles hill of the NDC- a weak communication and media strategy that played a significant role in the party’s loss in the 2016 election.

Another organisational and structural issue that affected the NDC negatively was the lackadaisical manner in which it introduced reforms to its party register. The Dr. Botchwey committee has highlighted this very important issue in its report as one of the primary issues for review by the party going forward. A party register that is haphazardly put together obviously opens the party to infiltration by enemies, whose grand agenda is to penetrate the party to cause disputes and conflicts within in order to weaken it going into the elections. A porous party register can for instance even influence the selection of good candidates for parliamentary elections, and thus create disaffection and apathy within the party going into the elections. A review of the NDC party’s biometric register is thus a must going forward as has been rightly recommended by the committee.

Let’s not forget that in the 2012 elections, the NPP made political capital of the technical issues of over voting and chewed on it extensively with an unnecessary election court petition that lasted for eight months. This lead to a judicial decision on over voting which needed to be applied strictly to the results in the 2016 elections by the NDC in any review of elections results constituency by constituency. This exercise has to be undertaken by the NDC to establish its true strength going forward.

With reference to the issue of hacking which was officially acknowledged by the EC, a call for an official inquiry by the EC into the matter should have been recommended by the committee. The NDC should thus petition the EC for an official public enquiry to be instituted on this matter to let the truth behind the incident be known to Ghanaians. Let’s not forget that the incident was so significant that it caused the EC to suspend its operations for a while. The NDC therefore needs to call for an investigation of this significant event for the record. Even almighty America with its sophisticated IT security infrastructure has identified the issue of hacking as a subject for intense public scrutiny into the results of their 2016 elections. Why the silence on this issue in Ghana? Ghanaians need to fully understand what this hacking incident was all about.

The issue of intelligence gathering on voter sentiments as carried on by the NDC going into elections 2016 needs to be the subject of review by the NDC. For it appears that the NDC’s intelligence gathering strategy going into election 2016 was also very weak. A good intelligence strategy by the NDC for the elections would have obviously indicated to the party that its chances were not as solid as it made its followers and sympathisers believe. This would have killed all complacency within the party and government ranks to enhance its fortunes in the elections.

There were thus internal and external dynamics that contributed to the NDC’s loss in election 2016. Hopefully the committee touched on all these issues. However where the report has omitted to reflect on some of the key elements that contributed to its loss, the NDC should go beyond the report and institute appropriate measures to set the records straight and rectify its shortfalls in order to devise a better strategy for victory in 2020. A comprehensive study of the strategies and methods employed by the NPP in the elections should also engage the attention of the NDC. Good and effective strategies employed by the NPP should be replicated. However negative and offensive strategies employed by them should not be followed, such as employing sheer deception and the use of vigilantism to intimidate voters.

Those within the NDC, who have for parochial reasons resorted to the blame game especially against ex- president Mahama, should therefore hasten slowly. There were a myriad of factors that caused the NDC’s loss in election 2016. Each one of them as identified in the Dr. Botchway committees report should be worked on together with those that were not captured in the report. A holistic review of the NDC’s loss is thus required to seal the various loopholes that were taken advantage of by the NPP in the elections. Of course this is not to say that we should discount the internal and organizational issues that featured negatively in the loss; such as an obviously weak campaign coordinating team as compared to the 2012 team that secured victory for ex-president Mahama.

Leadership of parliament directed to meet Committee over LGBTQ Bill

Celebrating Menstrual Hygiene Day: Are We Committed to Creating a Period Friendly Ghana?