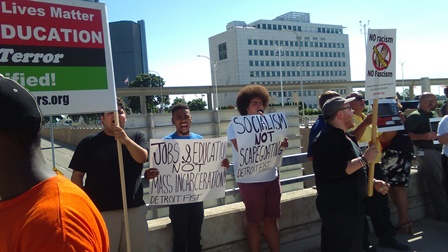 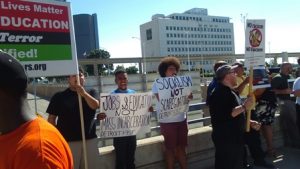 During the week of August 8 both Republican Party nominee Donald Trump and his Democratic counterpart Hillary Clinton made policy speeches in the Detroit metropolitan area.

Trump addressed the Detroit Economic Club on August 8 where he put forward his program for the revitalization of the United States. The presidential candidate delivered the address at Cobo Conference Center in downtown Detroit.

In Detroit it is the best of times for the struggle aimed at eradicating racism and economic exploitation which has prompted the destruction of the housing, commercial, educational and municipal services sectors of the city. The movements for change in Detroit are taking place during the worst of times for the overwhelming majority of the population suffering from the above-mentioned imposed social ailments.

Outside the Trump event in downtown, demonstrators congregated over an area of two blocks with signs critical of the Republican candidate and his policies. Members of the United Automobile Workers (UAW) distributed signs criticizing the demagogic Trump. The UAW along with many trade unions typically pledges their support to the Democratic candidates for president and legislative offices irrespective of who they are.

This year the campaign of Vermont Senator Bernie Sanders posed a formidable challenge to Clinton, who served as a Senator for New York and as Secretary of State during the first administration of President Barack Obama. Clinton’s program is one of continuing the pro-Wall Street program of the Obama administration along with the increased military and intelligence interventions throughout the Middle East, Africa, Latin America and the Asia Pacific regions. Sanders, an independent democratic socialist, ran on a platform advocating national health insurance; the breaking up of large financial institutions; a different approach to the Palestine-Israeli war of the last seven decades; among other issues. Senator Sanders was quite critical during numerous debates over Clinton’s close relationship with Wall Street where she delivered numerous speeches for undisclosed amounts of money.

Nonetheless, other organizations were present to lend their voices to the demonstration and political dialogue. Members of the Detroit chapter of Fight Imperialism, Stand Together (FIST) youth group led chants denouncing Trump and his appeal to racism, neo-fascism and war. FIST is allied with the Moratorium NOW Coalition to Stop Foreclosures, Evictions and Utility Shut-offs, which has sought for the last eight years to put an end to the theft of tens of thousands of houses by the banks.

Trump’s speech inside of Cobo called for more of the same failed policies of the last several decades including the cutting of taxes for the rich and the failed promises of lowering taxes for the working class. These policies of cutting and even absolving the rich from paying taxes has been utilized to finance even deeper levels of exploitation and expropriation from the workers and oppressed peoples in the U.S.

In Detroit firms run by Dan Gilbert and Mike Illitch, two billionaires, have been given preferential treatment by federal, state and local governments for years. Their business model emphasizes prestige projects such as sports stadiums and entertainment complexes which facilitate the continuing forced removals of the African American and Latino communities. These top-down economic programs are championed by the corporate media which systematically ignores the plight of the oppressed and working class saying in essence what is good for business is beneficial to the masses.

The crowd outside of Cobo was not receptive to this message being enunciated by Trump. Some of the Trump supporters came into the anti-Republican demonstration flashing their signs and consequently creating tensions.

One white man raised the dreaded Confederate flag at the front of the anti-Trump gathering triggering a clash which took away the symbol of slavery, civil war and the Ku Klux Klan. This man eventually landed on the concrete where he had to be rescued by the Detroit police. Members of the crowd began chanting: “Nazi scum off our streets!” No arrests were made and this sent a strong message to the racists within the Trump campaign that some people are prepared to disarm them of their symbols as well as political program.

Democratic candidate Hillary Clinton spoke later that same week outside of Detroit in neighboring Macomb County. Pollsters say she is trailing behind Trump in the county which is majority white. Nonetheless, there are African Americans and Latinos moving into Macomb County, many of whom are from working class backgrounds.

Clinton championed the economic policies of the last eight years under Obama. Objectively, beyond the bailing out of the auto industry not very much can be said of the Democratic program that is favorable to the working class. Although the UAW would speak highly of Obama for carrying through the post-bankruptcy re-structuring of the auto industry and the preserving of industrial jobs, this bailout resulted in the severing of tens of thousands of jobs; the closing of auto dealership shedding more union work; and the growing of the UAW through two and three tier wage structures that sought to divide younger workers being hired in at wages half of those of veteran employees and with far few benefits. There have also been attacks on the concept of the eight-hour day which was a fundamental demand of the union since its inception.

Why the Workers and Oppressed Need Their Own Political Party

Consequently, both parties represent the capitalist class which has been hell-bent on lowering the standard of living of the workers and oppressed in their mad drive for profit. There was no program to repair the damage that has already been done in the recent period as it relates to home and job losses; guaranteeing full healthcare coverage to all people; the eradication of police brutality; ending imperialist wars and the closing of Pentagon military bases and Central Intelligence Agency (CIA) field offices across the world.

In Michigan the water has been poisoned in Flint and the majority African American city needs the reconstruction of its infrastructure along with tens of thousands of jobs that were destroyed after the re-structuring of the auto industry from an earlier period during the 1980s, some three decades ago where both Democratic and Republican politicians failed to lift a finger to save the jobs and homes of these residents. Michigan was the only state in the U.S. which lost population in the last census period. Detroit’s population declined by 25 percent as a direct result of home foreclosures, evictions, utility shut-offs, small business failures and the crisis in an education system controlled by successive state administrations.

Clinton debated Sanders during the primaries in Flint yet nothing has been done to resolve the water crisis along with other economic problems in the city located some 70 miles north of Detroit. In Detroit itself despite the Democratic Party-allied politicians and trade union leaders, there has been nothing specific offered to the people as it relates to the declining infrastructure, racist manipulation by the courts and surrogate political establishment, and the failed system of public education.

These problems require political organizing independent of both the Democratic and Republican Parties. Working class and oppressed peoples need an organization that can speak unequivocally in their own name—where the real enemies of the people can be exposed and dealt with in a decisive fashion.

The people of Michigan need good jobs, economic opportunities, decent education, healthcare, services for children and seniors, along with environmental quality. The wars to be continued by the potentialities of a Clinton or Trump administration will not serve the interests of the masses. It is the ruling class that needs changing not its navigators, minions and surrogates.