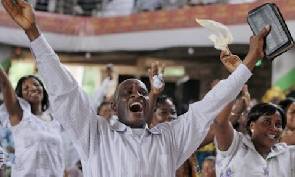 He said the Electoral Commission should also exhibit fairness, firmness and transparency and appealed to its officials to maintain neutrality and independence in the electioneering.

Apostle Amoani was addressing the opening ceremony of the 2016 International Prophetic Conference (Tarry Camp) of the church on the theme: “The Overcoming Power of the Last Days”.

The conference is one of the major prayer festivals on the church’s calendar intended to thank the Almighty God for His faithfulness, providence and protection over the church and the nation throughout the years.

Fifteen thousand worshipers from the Southern sector of the country are attending the conference which is also an occasion to seek the face of God for His favour for the individual members, the church, and the nation in the ensuing years.

Apostle Amoani said: “The conference also comes at a time when Ghana is at the crossroads in its democratisation process. Both the Presidential and Parliamentary elections are a few months away and we must not lose sight of the fact that some nations have been torn apart or become conflict-stricken after going through similar political exercises.”

He mentioned political intolerance and violence which are being witnessed in recent times prior to the presidential and parliamentary elections as some of the pertinent national issues which could tear the nation apart if left unattended to.

“The banning of activities of all political vigilante groups by the police during the election is, therefore, highly commendable since they could be a recipe for derailing the peace process.

Apostle Amoani said: “I have a firm belief and faith in God that this election shall be peaceful. There shall be no bloodshed in our land and God will watch over Ghana and select for us leaders who are God fearing to lead this nation to our promised land.

“The elections shall be devoid of acrimony, violence and malpractices that have characterised many similar elections, especially in Africa”.

He charged the Government to provide adequate and the needed resources “timely and promptly” and resist the temptation of abusing its incumbency to ensure a smooth process.

“I appeal again to the minority parties to avoid baseless suspicion and prejudice, and do away with electoral trivialities and pettiness. Provocative utterances, insults and character assassination should also be done away with by all the political players and continue their campaigns based on issues,” Apostle Amoani said.

He entreated the media, especially the state-owned, to show decorum in their reportage, avoid sensationalism and provide a fair coverage to all the political parties.

Apostle Amoani said the success or failure of the election depended on all. The clergy, judiciary, professional bodies, religious bodies, civil society, various interest groups and the electorate in general should all play their respective roles effectively and honestly.

He urged the electorates to vote for people of integrity and proven abilities and capabilities, and at the end of the process, accept the results and the decisions in good faith.

“Let us also pray for Africa as a continent, that there shall be peace and serenity in all African countries. That Africans should begin to feel proud of our beloved continent and show commitment in the development of this great continent.

“It is my expectation that this Prophetic Conference will be a turning point in your pursuit for the supernatural Power of God and the total liberation of our nation from every plan of the enemy; that you may prove to be what is good, acceptable and the perfect will of God.

“That the barren conceives and bear children, the jobless receives employment, the single gets married, the crippled, the blind and those with all kinds of diseases receive healing and our sorrows turn into joy as we receive the Power to Overcome,” Apostle Amoani said.