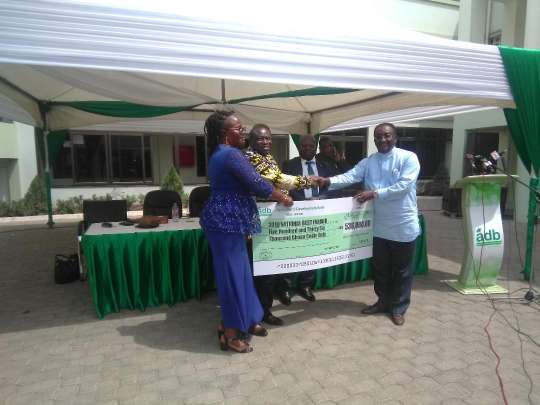 The Agricultural Development Bank Limited (ADB) on Tuesday handed over to Mr Charles Gyamfi, 2019 National Best Farmer a cash prize of GHC536,000.00 at a short ceremony in Accra.

Dr John Kofi Mensah, ADB Managing Director, presenting the award, said the change in the prize award from a house to cash was at the instance of major stakeholders to enable award winners expand their farms and employ more persons in their catchment areas.

He said ADB would provide the award winner with a dedicated Relationship Officer to assist in ensuring proper use of the money since his outlined projects were critical to the expansion of his business.

Dr Mensah said ADB would continue to partner government especially the Ministry to implement programmes and projects aimed at modernizing agriculture and improving the standard of living of farmers and fisher folks.

He encouraged farmers and fishermen to visit any of their 82 branches nationwide and engage their staff for further insights on their agricultural packages.

Mr Gyamfi, 2019 National Best Farmer, commended the bank and government for the award saying part of his award money would be used to expand his existing farm by purchasing productive inputs and another part would be used to acquire and install irrigation facilities.

He said he would construct a warehouse to store his farm produce, improve access roads to his farm and construct additional farm houses for the new 30 permanent staff to be employed.

He appealed to the bank to reduce their interest rates to farmers and give them long term loans.

Dr Afriyie Owusu Akoto, Minister for Food and Agriculture, commended the award winner who has allocated his cash prize for a list of projects that would bring prosperity to his business to the extent of ensuring climate change by setting part of the money aside for irrigation.

“It really reinforces me in my decision to change the way the awards were presented adding that one may have a house whether you need it or not, whiles your business may be suffering and may need crucial investment in certain sections to strengthen the business for the future,” he said.

Dr Owusu Akoto said in its current format the award would not only benefit Mr Gyamfi and his family, but the entire society.

He commended ADB for the support to the Ministry over the years adding that farmers should continue to benefit from its affairs.

In the coming years, Dr Owusu Akoto said, financing of agriculture should not focus only on cocoa license buying agents but rather to farmers and processers that are directly involved in the activity of agriculture