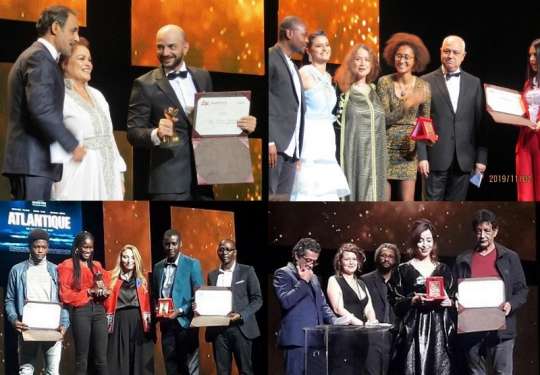 The 53rd Carthage Film Festival which stretched from October 26th to November 2nd ended with the Jury adjudging “Noura’s dream” by Hind Boujemaa (Tunisia) as the Golden Tanit for the best feature film.

The Carthage Film Festival created in 1966, is the oldest event of its kind still active in Africa. Initially biennial alternating with the Carthage Theatre Festival, it became annual in 2014.

A directing committee chaired by the Tunisian Ministry of Culture joined together with professionals of the cinema industry is in charge of the organization.

The Carthage Film Festival has been designed as a film festival engaged in the cause of African and Arab countries and enhancing the South cinema in general.

In the feature categories: The Best Long Documentary were – Golden Tanit, ”Talking about trees” by Souhaib Gasmelbari (Sudan); Silver Tanit, “For Sama” by Waad El-Kateab & Edward Watts (Syria); and Bronze Tanit, “A haunted past” by Fatma Riahi (Tunisia)

In the Short Film categories: the Golden Tanit went to, ”All come from dust” by Younes Ben Slimane (Tunisia); Silver Tanit was picked by ”Pacific” by Angie Obeid (Lebanon); and Bronze Tanit by “5 étoiles” by Mame Woury Thioubou (Senegal).

TV5 MONDE’s Special Award went to “khartoum off side” by marwa zin (Sudan); whilst the Golden Tanit for the best first feature film (Tahar Cheriaa Award): ”You will die at twenty” by Amjad Abu Alala (Sudan); and Special mention: ”A son” by Mehdi Barsaoui (Tunisia).

Tunis, (Tunisia) was the decorated with the prize.

The jury for the 2019 Carthage Film Festival includes: Mr Francis Ameyibor of the Ghana News Agency and former Vice President of Federation of African Cinematography Critics, Mr Kamel Ben Ouanes, a Tunisian University Lecturer, a Film Critic and Mr Victor Kabre of Burkina Faso, a Journalist and a Member of the Association of Cinematographic Critic of Burkina Fas. The three served as Parallel Juries.

The 15-member Grand Jury was headed by the French Senegalese Director Alain Gomis who was surrounded by the Japanese filmmaker Koji Fukada, the Algerian actor Hassan Kachach, as well as the Tunisian director Mahmoud Ben Mahmoud, the Moroccan director Meryem Benm’Barek, the Zimbabwean filmmaker Tsitsi Dangarembg and the Lebanese director Yasmine Khlat.

The Documentary Jury was however presided over by the American Director Jerome Gary, who worked with the Congolese film critic Djia Mambu, the Cameroonian director and film critic Jean-Marie Téno, the Tunisian Writer and Director, Mohamed Mediouni and the Egyptian filmmaker Mohamed Siam.

The First Feature Film Jury (Taher Cheriaa Awards) consisted of three members headed by the Palestinian Swedish Producer and Director of the Malmo Arab Film Festival, Mouhamed Keblawi. At his side, was the Tunisian actress and producer Anissa Daoud and the Rwandan filmmaker Joel Karekezi.