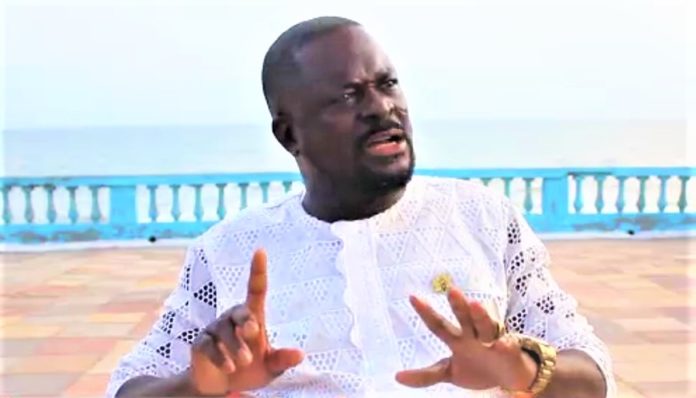 David Kankam Boadu, a firebrand dye-in-wool member of the ruling New Patriotic Party (NPP), as well as the Founder and President of the African Youth For Progress in the United Kingdom (UK), has descended heavily on the entire NPP national leadership and regional party executives for disgracing the party and President Akufo-Addo after producing unconvincing results in the just-ended 2020 elections as leaders.

According to him, the party leaders are complete disgrace for seeking their individual interests which led to the “almost” downfall of President Nana Akufo-Addo.

David Kankam Boadu was speaking on his weekly political series with the mission and vision of redirecting and re-awakening the Ghanaian spirit and patriotism for the nation to work again.

He said the actions of these leaders are the same events that led to the NPP’s defeat in 2008 and ahead of 2024, if they are not changed from the party leadership, the NPP will go down and the grassroots people are those going to suffer the most and not those rich elites.

He has called for a total overhaul of the NPP leadership since they failed to do what they were expected in the face of an election that was supposed to produce a resounding victory for the NPP.

David Kankam Boadu who was born and bred in NPP tradition is the Nephew of NPP Forefather, Dr. Kofi Abrefa Busia, opined:

“Let’s call a spade a spade! NPP as it stands now has been hijacked by these so-called big men who, instead of working hard for the party machinery were busy driving big cars and satisfying their greed instead of resourcing the grassroots of the party for an effective campaign that could have given us the huge margin of votes. These people have let the President Nana Akufo-Addo down and they must be voted out of the party. The President’s policies, the FREE SHS, FREE WATER, FREE ELECTRICITY, good healthcare, were enough to have won massive votes but the national executives, MPs, DCEs, regional executives refused to do their work.

…They are now asking questions over how come John Mahama and NDC managed to get so close to the votes required to win the presidency when they are the same people who failed to work. Some of us have suffered for the party and ahead of 2024 we won’t sit down this time for us to go into opposition,” David Kankam Boadu warned.

Coup d’état Here, Coup d’état There: Is it a sign of a failed democracy in Africa?

2020 Elections: We maintained level heads for the peace of Ghana – Mahama