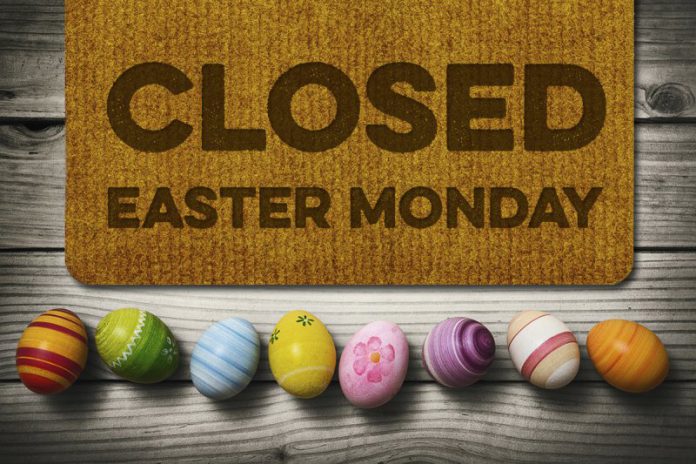 However, the day is a normal working day in some countries.

Easter is a celebration by Christians to remember the betrayal, crucifixion and resurrection of Jesus Christ as merry making is an integral part of the celebration, believing that together with Christ, Christians emerged victorious over death and sin.

Some reports say that on the Monday, the men of a town tied up the women and demanded a kiss from them before they were freed. Others say that a man had to carry women for a certain distance or lift her up at a given number of times in return for a kiss.

Now, Hocktide is only celebrated in the town of Hungerford in Berkshire and the main events are on the Tuesday after Easter. The Easter date depends on the ecclesiastical approximation of the March equinox.

According to Officeholidays.com, it was celebrated as Easter Week in many places formerly, but was later reduced to a one-day celebration in the 19th century. In many countries in Europe and South America, this day is known as “Little Easter”. The Catholic Church calls it “Monday of the Angel”.

According to the National Catholic Register, Pope John Paul in 1994, in a Vatican Radio recording gave an explanation for Monday of the Angel.

“The Pope asked, highlighting the need for an angel to call out from the depths of the grave: “He is Risen.” These words “were very difficult to proclaim, to express, for a person,” said John Paul II.

“Also, the women that were at the tomb encountered it empty but couldn’t tell ‘he had risen;’ they only affirmed that the tomb was empty. The angel said more: “He is not here, He has risen.”

He said: “Angels are servants and messengers of God and as purely spiritual beings, they have intellects and wills. They are personal and immortal. They surpass all visible beings in their perfection.

“Christ himself gives testimony to the angels when he said, ‘The angels in Heaven always see the face of my father who is in Heaven!’ (Matthew 18:10).

If people have been on a short vacation or have visited family or friends, who live some distance away, they often travel back on this day. For other people, it is just a welcome day off to enjoy the spring weather or work on their garden or home improvements.

Stores are often open to welcome shoppers, but public transport systems may run to a different timetable. There may be some congestion on train services and roads as people return from trips made during their four-day weekend. In Scotland, Easter Monday is a normal Monday.

In Austria and Southern Germany, there is the traditional “Emmausgang”, commemorating the walk of the disciples to Emmaus, to which Jesus followed them without being recognized.

In Canada, Easter Monday is a statutory holiday for federal employees and although not mandatory by federal regulation, some employers also give the day off to employees out of common practice.

In Egypt, the ancient festival of Sham Ennessim literally means “smelling of the breeze”). It is celebrated on the Coptic (Eastern) Easter Monday, though the festival dates back to Pharonic times (about 2700 BC). It is an Egyptian national holiday, which has traditional activities such as painting of eggs, taking of meals outdoors, and eating of feseekh (fermented mullet).

In Germany, people go out into the fields early in the morning and hold Easter egg races. For Roman Catholics, Easter Monday is also a Holy Day of Obligation in Germany.

In Italy, Easter Monday is an official public holiday called “Pasquetta”. It is customary to prepare a family picnic in the countryside or barbecues with friends.

In New Zealand, it is a National Public Holiday and schools often extend the weekend to the Tuesday to give students a five-day break.

In Spain and the Netherlands, Easter Monday is an officially public holiday, while in the United States of America, it is not a federal holiday and generally not observed on a nationwide level, apart from a few traditions such as the White House Easter egg roll.

On a local level, the day is informally observed in some areas such as the state of North Dakota, and some cities in New York, Michigan, and Indiana.

In Ghana, the day is observed as a Public Holiday. Churches during this period, organise picnics for their congregation for them to eat and drink together, dance and engage in sporting activities together.

The notion is to prevent members of the congregation, especially the youth from visiting places of interest that are against the teachings of the Church or places that could lure them into temptation.

The public visit beaches, restaurants, pubs, night clubs among others during this day in many parts of the country and Ghana is no exception.

However, with the outbreak of COVID-19, many countries have imposed a number of restrictions on public gatherings especially those that do not provide urgent or essential services.

In Ghana night clubs, beaches and pubs are still closed as part of the broader measures adopted by the leadership of the nation to control the spread of the virus.

Although holidays no matter the circumstance are enjoyed by active working-class people, a number of them who preferred to visit the places of interest still under ban in Ghana and other parts of the world might have to look elsewhere for relaxation and entertainment this time around to make the best out of the day.