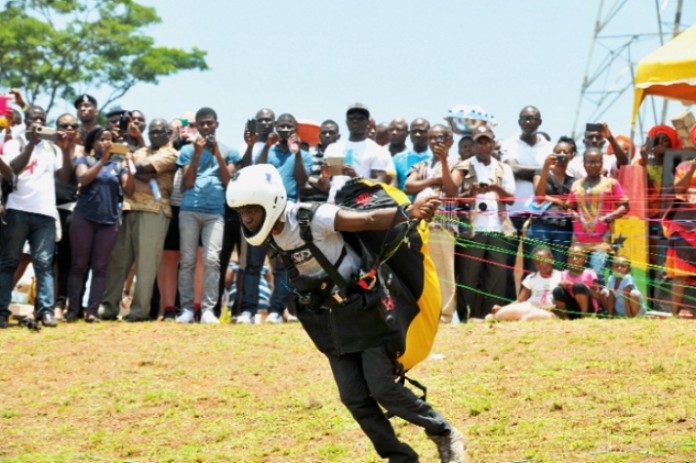 Mr Mark Okraku Mantey, the Deputy Minister of Tourism, Arts and Culture, has launched the 2022 Kwahu Paragliding Festival at Odweanoma Mountain in Atibie, in the Kwahu South Municipality of the Eastern Region.

The Kwahu Paragliding Festival, he said, is one of the ways the Ministry of Tourism, Arts and Culture was going to rely on to realise its target returns of US$2.3 billion this year.

Speaking at the launch of the 15th edition of the Kwahu Paragliding Festival, Mr Mantey expressed the hope that the Ministry would play a major role in achieving its target.

In attendance at the event, organised by the Ghana Tourism Authority (GTA), were security agents from the Ghana Armed Forces, Ghana Police Service, Ghana Fire Service and Ghana Immigration Service and the Chief Director for Tourism, Arts and Culture.

Thirteen paragliding pilots were expected but 12 pilots, comprising two Ghanaians and 11 foreigners were brought together to pilot the paragliding event.

Mr Mantey noted: “Tourism is only a marketing product, but the beneficiaries are all of us and so have an interest, whether you work at the hotel, a taxi driver or a cook.”

Mr Mantey said it was for the benefit of everyone that tourism was pushed to be the number one contributor to the country’s Gross Domestic Product (GDP).

He encouraged citizens to “party hard, network and treat people like they want to be treated”, adding that, “these will help release stress, secure a good future, and bring people back to the festival respectively.

Mr Emmanuel Atta Ofori Snr, the Municipal Chief Executive of the Kwahu South Municipality said: “I support the saying that tourism is the unseen God in the country.”

He observed that it was necessary to support the activities of GTA to promote the many tourist sites in the region and the country at large.

Mr Ofori gave an assurance that the Kwahu Easter Festival was back in full force after the two-year break due to COVID-19 in the country and that all the sites in the three municipalities, Kwahu South, East and West, were prepared to host tourists to their satisfaction.

The Director of Corporate Affairs for GTA, Mr Jones Nelson said a lot of energy was put into the organization, such as event vendors and organizers were registered, a Kwahu Easter Guide was printed, health persons and security agents were made available to ensure safety and security.

These, together with the presence of the first Ghanaian Tandem Pilot, he said, have made this year’s Kwahu Easter Festival more exceptional than the other years before COVID-19.