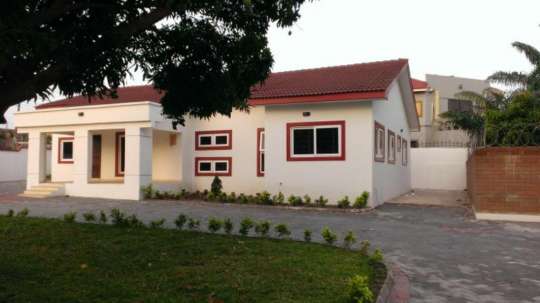 Government has engaged in a land-swap deal with a private estate developer for the construction of 21 housing units for some Judges of the Judiciary Service at a prime location at Cantonment in Accra.

The move was necessitated by the demolition of eight bungalows previously occupied by Judges at the Ridge, near the Greater Accra Passport Office, to pave way for the construction of the National Cathedral.

Mr James Dadson, a Technical Director for Lands at the Ministry of Lands and Natural Resources, made this known at a news conference in Accra when the Sector Minister, Mr Kwaku Asomah-Cheremeh explained measures instituted by government to protect and manage state acquired lands.

The Technical Director for Lands said government was undertaking re-development of state acquired lands in prime areas in Accra and those lands were re-negotiated and sold to private estate developers.

“Some of those lands were put on the market and sold out and the revenues generated were used to build more houses for government.

“So if you look at all these years, Roman Ridge, behind Ridge Church and other prime areas in Accra, you could see that there are bungalows there, one bungalow is knocked down and about eight or more are built on the same piece of land,” Mr Dadson explained.

He said the redevelopment of those lands started on plots of lands between Togo and American Embassies, where about seven bungalows were demolished and 68 housing units were built on the same place.

“It’s a way of solving the housing problem of the country using the revenues generated from the sale of these property. The houses sold may be commercial in nature, earning dollars, but at the same time, it increased government housing stock,” Mr Dadson explained.

“Therefore if you (land owner) have been fully paid compensation in the past, what is the justification of paying you again, today?” Mr Dadson queried.

Mr Asomah-Cheremeh, the Sector Minister, in an earlier presentation, said government was determined to reclaim all state acquired lands that were encroached by recalcitrant individuals and groups in prime areas in Accra.

He cited lands acquired by government for use by the Military, educational institutions, hospitals, industrial enclave and road reservations, which were encroached by individuals with impunity.

“Government will make sure all encroached state acquired lands are reclaimed, protected and utilised in a manner that will guarantee their preservation for future generations,” Mr Asomah-Cheremeh assured.

The Sector Minister announced that government, through the Lands Commission and security agencies, in collaboration with Anyok Holdings Limited, a private development company, have begun evicting and demolishing illegal structures on state lands in parts of Accra and surrounding communities such as Afienya, Oyarifa, Diary Farms, Danfa, Kweiman and Amrahia and ensure that offenders were prosecuted accordingly.