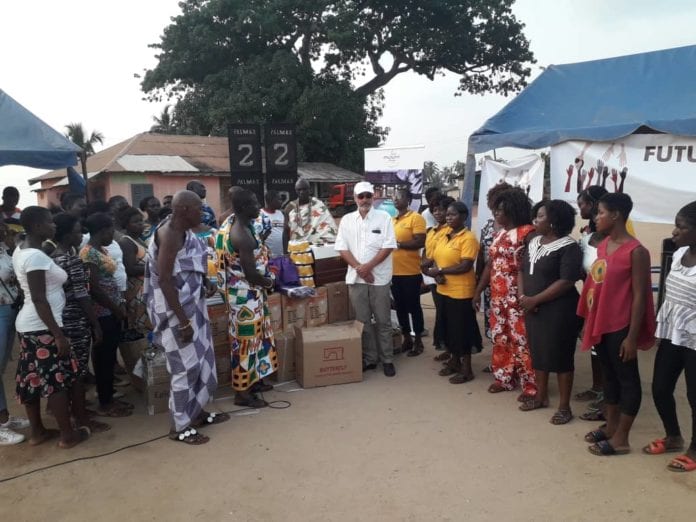 The three-year fully sponsored apprenticeship training programme is aimed at equipping the young women who are teenage mothers and school dropouts mainly from Agyan, Akonu, Domunli and Axim, all fishing communities to learn tailoring and hairdressing.

Speaking at a mini durbar held to inaugurate the beneficiaries at Axim, the Nkosuohene (Development and Welfare Chief) Nana Osei Nkwantabisa, initiator of the project commended all for their support and the benevolence of sponsors especially Lou Moon Lodge Hotel, Axim, Futuro Per Tutti, an Italian based NGO, Tullow Ghana Ltd, Jacqueline Adomako Foundation and Fameyeh Consult Ltd for their commitment towards helping the vulnerable in the society.

He charged the beneficiaries to remain focus to the new opportunity given to them since it will help them to become independent and useful to the society, adding that they must ensure self discipline and accord their instructors the utmost respect throughout their three-year apprenticeship programme.

The Chairman for the occasion, Nana Kwaw Tendinli III, the Acting Paramount Chief of Upper Axim Traditional Area lauded the initiative and admonished the beneficiaries to put the opportunity given to them into a good use.

He called on other stakeholders and corporate organizations in the region to consider supporting traditional authorities in building the capacities of the youth to help alleviate poverty and create jobs.

On his part, Mr. Paul Ramlot, CEO of Lou Moon Lodge Hotel, Axim and headline sponsors of the project reiterated his continuous partnership and support to the traditional authority to help build the capacity of the youth and help improve the living standards of the people especially along their catchment area.

He advised the beneficiaries to take their apprenticeship training seriously so that they become professionals in their endeavours.

The country representative of Futuro Per Tutti, Italy, Enrico Biasutti whose speech was read on his behalf expressed his delight in supporting the needy young women to learn a vocation to enable them become resourceful in the society.

The Divisional Chief of Otupai in the Lower Axim Traditional Area, Nana Awuza III admonished the young women to be mindful and avoid bad friends especially men who might lure them into bed hence backsliding.

He urged the Tailors and Hairdressers Association of Axim to ensure that the beneficiaries are given the best training to enable them become good ambassadors after their training.