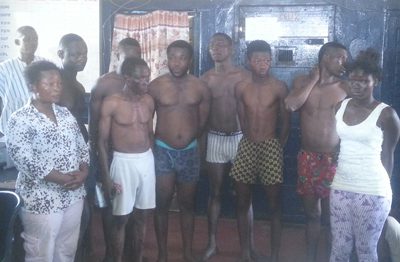 Twenty-seven (27) suspected criminals have been arrested in a special operation carried out by the police at Kasoa-High Tension.

Knives, mobile phones, dummy phones, screw-drivers, hammer, gambling machines, lamps and an undisclosed amount of cash, were seized from them.

Police Superintendent, Kofi Ahiatafu, the Kasoa District Commander, told journalists that the suspects were going to be screened and those found to have been involved in any criminal activity, arraigned.

The operation was part of a nation-wide exercise to bring down crime – rein in those who had chosen to live outside the law.

They would go after criminals terrorizing law-abiding people in the area, adding that, the police were determined to make Kasoa a no-go area for miscreants

Supt Ahiatafu expressed worry about the growing abuse of hard drugs by the young people and invited everybody to support the police to deal with problem.

The police had in an earlier swoop nabbed 135 suspected criminals, 80 of them have been remanded to make their next court appearance on Monday, May 14.

The District Commander asked the people to have confidence in the police – help to flag up criminals in their communities.