At least three people were killed and four others injured after a heavy-duty truck carrying a container fell on a bus in Nigeria’s southwest region on Tuesday, said the Federal Road Safety Corps (FRSC).

The incident which occurred in the city of Ibadan, capital of the southwestern state of Oyo, was due to a brake failure and loss of control by the driver of the truck carrying the container, the FRSC said.

Uche Chukwurah, head of the FRSC in Oyo, told Xinhua that two men and a woman were trapped when the container fell and pushed the bus, which was loaded with about 18 passengers, into a ditch.

Other passengers were rescued unhurt, witnesses said. The fallen container was immediately removed from the road to ensure a free flow of traffic.

Road accidents are quite frequent in Nigeria mainly due to poor roads, badly maintained vehicles, and reckless driving. 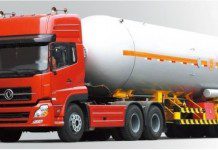