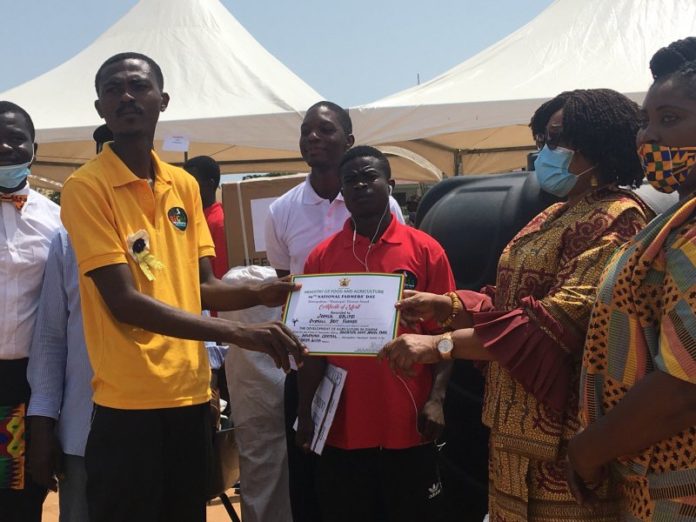 The celebration, on the theme: “Ensuring Agribusiness Development under COVID-19—Challenges and Opportunities” was observed by the Ablekuma Central Municipal Assembly for first time.

Mr Belifei said he started rabbit farming with five rabbits between 2005 and 2007 with financial support from his parents and by dint of hard work, he had a total of 500 rabbits as at 2017.

He said rabbit farmers faced many dangers whenever they went into the bushes to collect feed. These dangers included encounters with poisonous reptiles and insects like scorpions.

He encouraged the youth to take to agriculture since it was a lucrative venture and called on government to support rabbit farmers to incease productivity.

Madam Mariama Karley Amui, Municipal Chief Executive (MCE) for Ablekuma Central Municipal Assembly, said Agriculture, if given a central role, would drive the new development agenda for Ghana, a reason for which the sector must attract investment from both public and private sectors and create jobs.

She commended the local Department of Agriculture for promoting home gardening and also ensuring that 26 households within the Municipality received 1,030 lettuce seedlings while 762 also received cabbage seedlings.

Madam Pamela Bobuafor, Ablekuma Central Municipal Director of Agriculture, said the Department needed to support farmers and other actors along the value chain to build the necessary capacity that allowed for innovation, efficiency and the adoption of improved technologies and varieties to drive production.

As such, she said farmers had been given training in areas such as Agribusiness and Farm Management, Post-Harvest losses in fruits and Vegetables, Climate Smart Agriculture, Food Handling, Safety and Sanitation, Good Agricultural Practices and the Proper Handling of Drugs and vaccines.

She said the Department also undertook Home farming Demonstration to introduce new and improved technologies to over 50 City dwellers along with Surveillance and Biosecurity in Livestock and Poultry to ensure a stable animal health situation to improve sustainable Livestock Production and promote public health.

“Additionally, extension officers were on hand at all material times to assist farmers to resolve their challenges. In all, over one hundred and seventy stakeholders made up of farmers, processors, input dealers and marketers have benefited from the aforementioned activities of the Department.”

She said one of the critical challenges facing Agriculture in the Municipality was the limited arable space for crop farming and inappropriate housing in the livestock subsector, leaving communities in deplorable environmental condition with its health implications.

She recommended the commissioning of a joint committee made up of the Department of Agriculture, Environmental health, Works and City Planning departments to thoroughly assess the situation and make recommendations to the Assembly for necessary remedial actions.