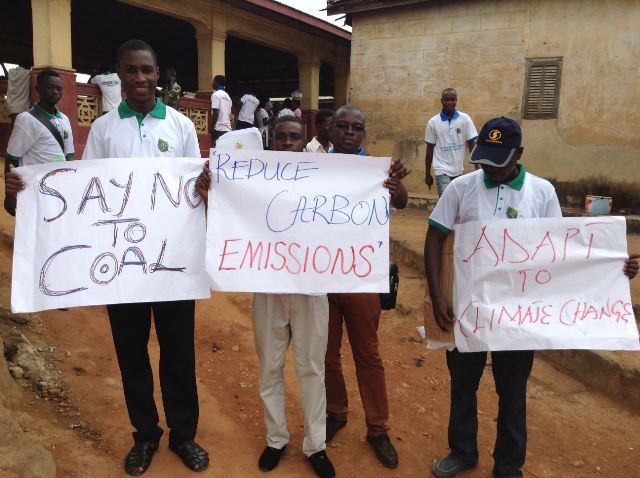 A youth activist group calling itself 350. Ghana Reduce Our Carbon (G-ROC) has cautioned the youth of Komfueku against the dangers of coal- powered plants and asked them to reject any of such projects proposed to be established soon within their community. 350. G-ROC in partnership of other key holders organized what is called the biggest forum and rally ever to hit Komfueku, a village located within Shama district of the Western Region to sensitize the youth on their roles towards the environmental problems and to ensure that the life of children, women and elders are protected.
At the forum, most leaders of the group including other stakeholders partnering the campaign against coal took turns to vigorously sensitize the youth on the impacts of burning coal, highlighting the dangers the community will face in terms of air pollution on people?s health.
The National Coordinator of the group, Chibeze Ezekiel told Radioxyzonline in an interview that the motive behind the forum and the rally was to enlighten the youth about the dangers of coal plant project expected to be established by the Sunon Asogli Power Plant which is aimed at producing 700 megawatts of power using coal.
This agreement was signed between the Sunon Asogli Power Plant and the Shenzhen energy group from China somewhere in February, 2014 which the group believes the said coal plant will be sited within the Shama district especially Komfueku village though the authorities refuse to comment about the actual location.
Ezekiel believes renewable/clean energies are safer and sustainable sources of energy generation and?consumption , condemning??the energy from coal, he??describe it as a death trap and charged the entire community not to allow such project to be take place in their community.
?We are aware of the coal – power plant to be established somewhere in Domlemi in Jomoro district in the Western Region but we don?t seem to know the actual site, but we?ve settled on the Shama traditional area as the community to host the event partly because of the large water body which makes it a potential area to site a coal plant, realizing the danger ahead, we can?t wait longer but to caution the people against it? he reassured.
According to him, research conducted by the World health Organization reveals, Coal particulates pollution cause approximately one million deaths annually across the world.
One third of all premature deaths are related to air pollution sources.
Coal-fired power plants cause nearly 24,000 premature deaths annually in the United States and finally, Infant mortality was shown to increase with coal consumption in countries such as Chile, China, Mexico, Thailand, Germany and Australia.
?Not to even talk about the impact on the environment, at each stage of its life cycle, coal pollutes the air we breathe, the water we drink and the land we depend on therefore we must resist it? he stressed.

He raised issues on why the environment impact assessment not been made public, in addition to that??he noted China?s National energy administration abolished the permit it??granted the Shenzhen Energy group permission to construct a coal-fired plant when there were wide spread protests by inhabitants of the community. ?The question is Why Ghana?? he asked.
Head of Public relations of G-ROC Farid Shamsu-deen, says the clean coal technology do not solve all problems and therefore not feasible to rely on.
He called on the government to reconsider the decision about coal plant and focus on renewable energy to protect the environment from getting degraded furthermore, create job for the unemployed youth.
Farid noted that as part of the global power shift phase 2, G-ROC will be organizing a street carnival next month at Ho in the Volta Region to augment sensitization of the youth against the climate change and its related issues throughout the whole country.
G-ROC is a grassroots movement formed with the aim of mobilizing and empowering young people in partnership with key stakeholders to actively champion the need to reduce carbon emissions as a key effort in combating?climate change under the global power shift project (GPS) phase 2
Send your news stories to newsghana101@gmail.com and via WhatsApp on +233 244244807 Follow News Ghana on Google News

Coronavirus fight: Halt discrimination and violence against women and we win

Construction on Ghana’s US$1.5 billion coal plant starts in April