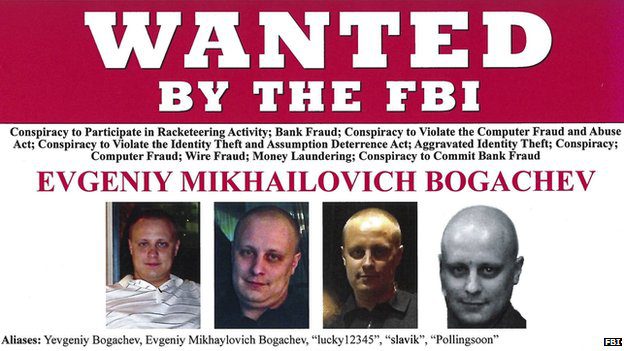 Bogachev?s face has been plastered on a wanted notice by the FBI

Evgeniy Bogachev was charged last year in the US with being behind a major cybercrime operation that allegedly stole more than $100m (?64.7m).

He was last seen in Russia, where he is believed to remain at large.

Arresting him may be difficult, as the US does not have an extradition treaty with Russia.

Mr Bogachev, also known as ?lucky12345? and ?slavik?, is accused of running the GameOver Zeus attack network, thought to have infected more than one million computers.

Victims were tricked into downloading malware ? malicious software ? which then searched specifically for financial information.

Evgeniy Bogachev was charged last year on counts including conspiracy, wire, bank and computer fraud, and money laundering, after the FBI said it broke up the network.

He is one of the FBI?s most wanted cyber-criminals.

?This reward offer reaffirms the commitment of the US government to bring those who participate in organized crime to justice, whether they hide online or overseas,? the US State Department said.

The reward is being offered for information leading to the arrest or conviction of Mr Bogachev.

The head of the FBI?s cyber crime division, Joseph Demarest, said Russia?s internal security agency had expressed an interest in working with the US on cybercrimes, according to Reuters, but did not link it to the Bogachev case.

He also said the agency was aware of 60 different cyber-threat groups linked to nation-states, but gave no further details.