A powerful typhoon left four people missing and injured more than 50 others on Monday while wreaking havoc as it passed by Japan’s southwestern island of Kyushu.

Six prefectures had issued evacuation orders or advisories to some 870,000 people as of 2:30 p.m. local time on Monday, with utility companies saying that 300,000 households, mainly in the Kyushu area, have been left without electricity.

As for Typhoon Haishen disrupting transportation, around 580 domestic flights were canceled on Monday and all Shinkansen bullet train services were canceled in Kyushu as well as services between Hakata and Hiroshima, operators said.

The Japan Meteorological Agency (JMA) warned people across wide swathes of Japan to remain vigilant for swollen rivers, storm surges, floods and further possible landslides as the the typhoon heads for the Korean Peninsular.

Typhoon Haishen was moving on a northward trajectory at a speed of about 50 km per hour off the eastern coast of the Korean Peninsula.

With an atmospheric pressure of 960 hectopascals at its center, the typhoon is continuing to generate powerful winds recorded at up to 180 km per hour as of 12:00 p.m. local time, the JMA said. 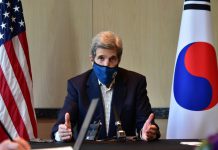