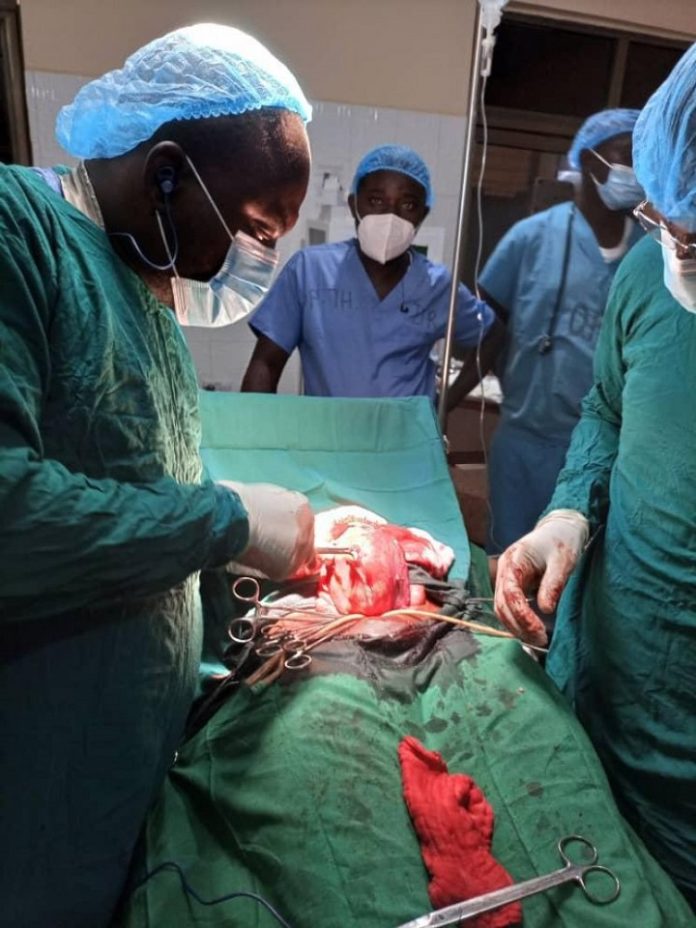 More than 40 children in the Builsa North Municipality of the Upper East Region have benefitted from free surgical operations conducted by the Team of Hope, a Non-Governmental Organisation, at Sandema.

The free surgeries, undertaken at the Sandema Hospital, saw parents trooping into the facility with their children with various surgical conditions, some of which were congenital abnormalities.

On the fourth day of the week-long exercise, about 144 patients, including children, had successfully undergone different surgical procedures including colectomy, hydrocelectomy, lipoma, hysterectomy, and thyroidectomy among others.

When the Ghana News Agency (GNA) in Sandema visited the theatre of the Hospital, patients were in theatre gowns and seated in queues, waiting to be operated on, while the three-bed capacity recovery ward of the theatre was occupied by recovering patients.

Owing to the surgeries, major wards of the Hospital were full, with staff, especially theatre staff, running extra duties to ensure all operated patients were properly cared for until they were discharged.

Dr Benjamin Akinkang, the Founder and Lead Doctor of the Team of Hope, in an interview with the GNA, said: “We have actually done quite a number of surgeries on children.”

“Most of those are congenital hernias, we have had quite a number of communicating hydroceles and a few undescended testis. One which was of interest was a baby with massive abdominal distension that we decided to explore,” he said.
Hydrocele is a fluid-filled sac around a testicle, often first noticed as swelling of the scrotum

Dr Akinkang explained that the baby had urethral duplication with massive hydro-uretero nephrosis, saying: “The kidney was actually all water, and so he ended up getting a left nephrectomy, and is doing very well.”

“There is another one currently on table with Hirschsprung’s disease, a condition of the large intestine that causes difficulty passing stool.”

“He is three years old, the abdomen is massively distended, he does not look fit, so we are going to do a colostomy for him, and subsequently refer to a Paediatric Surgeon.”

Dr Akinkang said the Team did not operate on all the conditions booked, and that “with some of them we do watchful waiting. So, with the hydroceles, most of the ones that we have operated on are more than four years old.”

“So if at that age they do not close, then they will not close spontaneously. But then, parents will have to see medical personnel to distinguish between whether it is a hydrocele or a hernia and then take the appropriate action.”
He said hernias in children were repaired as and when they came, “but with the hydrocele, we wait for them to grow a bit. A few children under two years were booked, but we counselled the parents because they were not ready for surgery.”

Dr Akinkang advised parents to seek medical attention early if they observed any abnormalities on the bodies and general well-being of their children.

Some parents of children who were successfully operated on and were recovering at the Paediatric Unit of the Hospital, commended the Team for the “life-saving surgeries for their children.”

Madam Jennifer Akanlugsi, mother of a two-year old boy, who successfully underwent a procedure, said but for the team’s intervention, she would have been helpless.

Children Will Die From Strange, Terrible Disease; Doctors Should Be On Alert – Rev. Faith Ami Amewonu

NHIS to provide funding support to children with kidney disease

We must ensure the comprehensive development of children – Second Lady