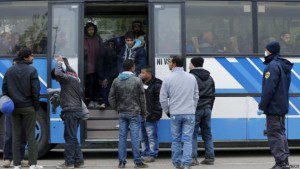 Around 40 migrants who were crammed into a truck without ventilation survived a journey from Romania to Austria, Austrian police reported on Wednesday.

The Syrian, Iraqi and Turkish nationals – including six children – escaped after signalling the driver to stop at Bruck an der Leitha, a town near Vienna.

“The witnesses reported that they feared for their lives and suffered from lack of oxygen,” police said in a statement, adding that numerous people had passed out temporarily during the journey.

Police apprehended 38 people following their escape on Wednesday last week. The migrants reported that a total of 43 persons had boarded the truck in Romania, suggesting that some of them may have evaded capture by Austrian authorities.

The Turkish truck driver was taken into custody. The smuggled migrants told investigators that they had first travelled from Turkey to Romania on various routes.

The case brought up memories of a fatal truck incident in 2015, when 71 smuggled migrants were discovered inside a truck that had been abandoned along a motorway near Bruck an der Leitha.