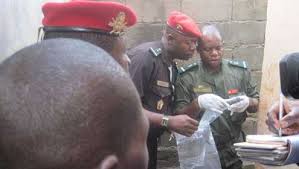 A senior official of Cameroon National Gendarmerie said on Saturday 46 bags of marijuana estimated at 1,000 kg have been seized in the country’s restive Northwest region.

After receiving a tip-off, the gendarmes in the region’s chief town of Bamenda, seized the marijuana that were disguised as foodstuffs loaded on a vehicle destined for commercial capital, Douala, Northwest Legion commander, colonel Raymond Boum Bissoue told reporters.

“After months of investigations, these men did not know we were monitoring them till when we put our hands on them. This is a major step to fighting insecurity in the region,” Bissoue said.

The driver of the vehicle and two other suspects were arrested by security forces.

The suspects confessed they bought the products from neighbouring Nigeria.

Illicit trade of marijuana has been on the upsurge in the region since a separatist conflict began in 2017, according to security reports.