An Egyptian woman, believed to be the world’s heaviest woman that weighs some 500 kilograms, reached India Saturday for weight reduction surgery, doctors said. 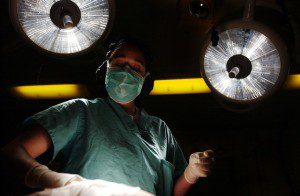 Eman Ahmed Abd El Aty, 36, arrived at a health facility in Mumbai on Saturday morning for the treatment from Egypt’s Alexandria city.

Reports quoting family members of Abd El Aty said she had not moved out of her house for 25 years.

According to doctors, she will remain under observation for about a month before undergoing surgery.

Indian doctors have been treating bed-bound Abd El Aty for almost three months and took all necessary precautions to transport her from Egypt.

Reports said a team of Indian doctors went to Egypt to optimize the conditions for Abd El Aty’s travel, monitor her vitals and prepare for any eventuality during the flight.

The doctors had furnished a chattered flight with all essential equipment like portable ventilator, portable defibrillator, oxygen cylinders, intubating laryngoscopes and other safety drugs, besides a specially designed bed for Abd El Aty.

Last year, the Indian embassy in Cairo initially denied visa request of Abd El Aty because of her inability to present herself in person at the office.

However, she was later granted the visa after her surgeon Lakdawala tweeted to Indian Foreign Minister Sushma Swaraj about Abd El Aty’s condition. Enditem