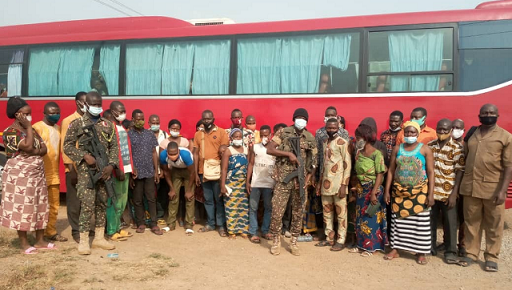 Officers of the Volta Regional Command of the Ghana Immigration Service on Wednesday intercepted a bus with illegal immigrants from Benin and Togo at the Asikuma Inland Checkpoint in the Volta Region.

The 51 ECOWAS nationals, included 49 Beninese and two Togolese, who were travelling on board a Hyundai vehicle with registration number AW9955-19.

Deputy Superintendent of Immigration Philip Essuman, Commander of the checkpoint, in a release copied to the Ghana News Agency (GNA), said the suspects were arrested after scrutiny during a routine stop and search at the checkpoint.

He said they were suspected to have gained entry into the country illegally from neighbouring Togo, using unapproved routes.

The suspects, comprising 15 females and two minors, were sent to the Aflao GIS Command and written statements confirmed that commercial motorbike operators on the Togo side of the border aided their entry.

DSI Essuman said the driver of the vehicle Osei Asibbey was arrested and handed over to the Aflao Command.

He said the suspects claimed they were on transit to Abidjan, the Ivorian capital but were sent back to Togo.

The Commander appealed to travellers using the Asikuma and Sogakope inland checkpoints to comply with the various security measures.

Mr Felix Klu-Adjei, Volta Regional Public Relations Officer of the Command, said it was a crime to facilitate the entry into the country of immigrants and warned recalcitrant members of the public would face the rigours of the law.

“We are entreating all citizens and individual drivers who frequently use the Asikuma and Sogakope Inland Checkpoints, as a matter of responsibility and obligation to the state, cooperate with current strategic security arrangements; which is aimed at tracking illegal immigrants at the said locations,” he said.