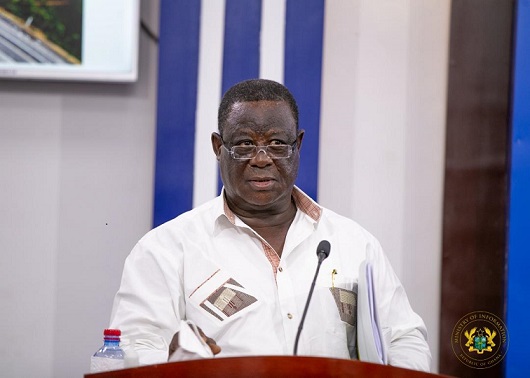 Mr Kwasi Amoako-Atta, the Minister of Roads and Highways, Sunday said government had earmarked 11,000km roads for construction across the country and 6,000km are expected to be completed by the close of 2024.

To that end, he said, government had selected 81 critical road networks in all the 16 regions, translating into 2,167km, estimated at a cost of GHc7.8 billion.

Mr Amoako-Atta, addressing the media at the Minister’s briefing in Accra on Sunday, to update the public on the state of Ghana’s road situation, said the Akufo-Addo-led Government completed 4,000km of roads in its first term in office – 2017 to 2020.

“We have been fixing your roads as far back as 2017 and so those who are saying we should fix the road should open their eyes and follow us,” he said.

“The roads are being fixed so get up and follow us. You’re being left behind because we have gone far,” Mr Amoako-Atta stated.

The Minister mentioned some roads, bridges and interchange projects government had earmarked for construction from now till 2024.

These include 325 road networks translating into 5,000km under the cocoa road programmme, with an estimated cost of 14.5 billion Ghana cedis; 88 town roads translating into 565.3km at an estimated cost of one billion Ghana cedis; and 1,500km asphaltic overlay and 441km roads under the Sinohydro Master Plan Programme, which government had already received US$500 million from the Chinese Government.

Mr Amoako-Atta said the Akufo-Addo-led government completed 50 bridges in its first term and had targeted 200 bridges in its second term, expecting to complete 120 of them by the end of 2024.

Government had also targeted 25 interchanges across the country for construction and would complete 20 of them by the end of 2024, he said.

Nine of the interchanges were ongoing simultaneously across the country, the Minister said.

He said 287km roads within the oil enclave in the Western Region were ongoing and some had even reached 90 per cent completion, being funded by the Ghana National Gas Company and Ghana National Petroleum Corporation.

Government had paid GHC10 billion arrears owed road contractors since assumption of office, some of the debts dated as far back as 2011, Mr Amoako-Atta said.

He said Ghana needed about 10 billion US dollars, equivalent to GHC60 billion, to fix all major roads in the country.

“Government is focused on fixing the country’s roads and will not be intimidated by any political propaganda from any quarters,” he said.

However, Mr Amoako-Atta said, the Ministry’s doors were opened to welcome any good suggestions that would help fix the country’s roads.

He said government had signed a five-year reliability defects with road contractors, which would mandate any contractor to fund the routine maintenance works on a road constructed shoddily for five years.

The move, he said, was to curb poor road construction and ensure value for money.