With the upsurge of banks in the country, some financial analysts have advised bankers to tap into the 70 percent unbanked population in Ghana to increase their cash deposit base in order to create more credit facilities for businesses. 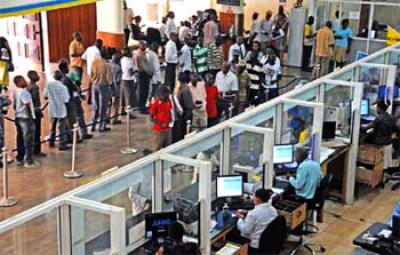 Out of Ghana?s population of 25.9 million, a whopping 18.13 million, representing 70 percent of the population is unbanked.
According to the World Bank, only 7.77million, representing 30 percent of Ghana?s population have an account, or multiple accounts with banks in the country.
Some responses gathered by Business Day in an interaction with small business owners and market traders revealed that most people shun banks due to a number of reasons which include lack of trust, difficulty in accessing funds, cumbersome procedures in opening accounts, and high interest charges on loans.
?The banks are not ready to assist us the local entrepreneurs because they think we are vulnerable to the conditions they set?, a trader said, explaining that ?the banks are just not being innovative in their credit-delivery role?.
Surprisingly, most SME owners told Business Day that they cannot trust banks with their savings due to hidden charges and unclear conditions, hence, will save with microfinance firms for quick returns.
?The microfinance firm are real and pragmatic, they give you good outlooks with their plans in a short term? another trader said.
Meanwhile, Deputy Finance Minister, Mona Helen Quartey speaking at a Financial Literacy Week recently, expressed worry at the decision by some Ghanaians not to own bank accounts or do any investment for the future.
Ms. Mona Quartey, who bemoaned the proliferation of unregulated financial institutions across the country warned the public to be cautious when dealing with such companies.
?For those who don?t save with regulated companies, if anything goes wrong or if you lose your savings, there is no regulator to back you up or to protect you or give your savings back to you? she warned.
However, speaking in an interview with Business Day, a Development Manager at the Association of Chartered Certified Accountants (ACCA), Ghana, Mr. Isaac Gyimah Adigu maintained that the 70 percent unbanked population must be an indication to government of a potentially viable cash hub for banks to venture into if only they can develop innovative products to win the trust of the public.
He stated for instance that, banks could be innovative by using the current increase in mobile money transfer to capture the unbanked population.
Currently, there are close to 30.2 million mobile telecom subscribers in the country, a development that could be harnessed by banks to expand their customer base.

?The bottom line for bankers is in the customer base. The more customer base you have the more customer deposits you will get, which means cheaper funds to invest to gain more interest income?, he said.
He explained that the era where banks created more branches has passed since it did not necessarily translate into an increase in cash deposit.
He was of the view that banks could partner with customers who use the services of mobile money to create an account for them.
?Do you know what will happen to the economy in a day if a sum of GH?200 million is transferred nationwide through a mobile network but is unable to be withdrawn due to poor network, he queried.
According to him, studies in Ghana have shown that most of the marketing and sales campaigns employed by banks are all into promotion instead of recruiting more customers.
?If banks are really serious about reaching out to the unbanked, knowing them and designing the right products are not the only things they need to do. They must sell it to them. If you are spending more than 30 percent of your marketing budget on awareness then you are wasting money? he added.

He counselled that banks should spend 70 percent of their budget on recruiting more customers.
?Recruitment can take different forms, but one key way to measure the return on investment in marketing and sales is all about knowing where each customer is coming from?, he added.
Mr. Adigu stated that marketing heads need to implement a Return on Investment System, which will save the organization from unprofitable marketing and sales promotion initiatives.