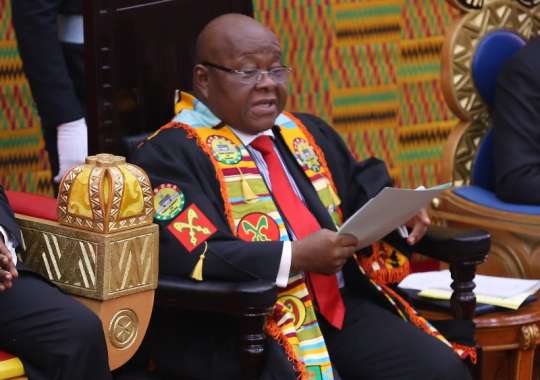 Speaker of Parliament Prof Aaron Michael Oquaye at the weekend adjourned Parliament sine die, to enable Members participate in the final leg of campaigning before the polls.

On December 7, 2020, the Ghanaian electorate will elect a president and Members of Parliament (MP).

In his closing remarks, before the adjournment, the Speaker expressed confidence that the 2020 would be orderly, fair and credible.

“I am confident that together, we can have an orderly, fair and credible election,” the Speaker said, and announced that “the house is making adequate preparations towards the dissolution of the 7th Parliament and I urged all to work in tandem for a seamless transition.”

The Speaker said: “As the 2020 general elections approach, I wish you all the very best and I pray that our nation will be law-abiding as we know it has always been and that every official will play his or her part according to the requirements of the law of our country.”

The House is expected to be back after the election, to be followed by its dissolution at midnight on Wednesday, January 6, 2021, to pave way for the Eighth Parliament on the morning of Thursday, January 7, 2021.

The Seventh Parliament would have maintained the full numerical strength of 275 at the time of the last adjournment had Mr Andrew Amoako Asiamah, MP for Fomena, not been withdrawn from the House for his decision to contest as independent candidate in the next election, or the House lost Mr Ekow Hayford Quansah, to armed robbers in a gruesome murder last October.

There were on two political party representation in the Seventh Parliament-169 on the Majority Side and 106 on the Minority.

After the dissolution of the Seventh Parliament, on the eve of January 6, 2021, the new members would in on January 7, elect the First and Second Deputy Speakers as well as the Speaker of Parliament.

The substantive Speaker will in the morning of the January 7 swear in the new MPs, and the elected President, with a novelty of the ceremony being held at Parliament House rather than the Black Star Square.

Majority Leader Osei Kyei-Mensah-Bonsu, represented by Kwasi Ameyaw-Cheremeh, also called for peaceful elections, and appealed to political parties to desist from politicizing the issue of security in the country.

He said: “It is my hope that, barring any mishap, the House will be able to sit after the elections to enable these instruments to enter into force in the course of time.”

Minority Leader Haruna Idrisu called on the House to put in measures to protect the loss of experienced legislators.

He said: “You cannot doubt the competence and experience of many of the experienced hands we are losing when it comes to the craft of law making and their dedication and commitment to duty.

“We need to reform our primaries’ process in order to protect experience in the House,” he said.