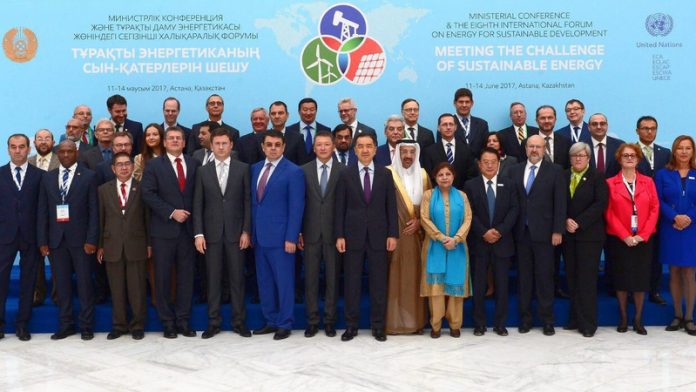 Ministers and high-level officials from 85 countries sent a strong signal in a statement adopted at the Ministerial Conference, during the Eighth International Forum on Energy for Sustainable Development, which opened in Astana, Kazakhstan on 11 June.

Seven  voluntary  actions  in  the  Ministerial Declaration outline ways to
accelerate the transition to a sustainable energy system, from establishing
national  sustainable  energy  action  plans, to developing internationally
recognized  minimum  energy  performance  standards  in  all  sectors,  and
advancing  methods  for public data collection and indicators on energy for
sustainable development.

The event was held under the auspices of EXPO 2017 ‘Future Energy,’ and for
the  eighth  time,  is  co-organized  by  the five UN regional commissions,
coming  full  circle  in  Astana,  where  the first forum was held in 2010.
High-level   participants   addressed  sustainable  energy  challenges  and
opportunities  in  five  ministerial dialogues covering sustainable energy,
energy security, regional trade and infrastructure, the energy-climate-food
nexus,  renewable energy in Central Asia and promoting new technologies and
innovations. More than 1,000 people attended the Ministerial Conference.

At   the  opening  ceremony,  United  Nations  Under-Secretary-General  and
Executive  Secretary  of  the United Nations Economic and Social Commission
for Asia and the Pacific (ESCAP) Dr. Shamshad Akhtar, acknowledged that the
global energy transition is underway.

Speaking  on behalf of the five regional commissions, Dr. Akhtar said, “The
2030  Agenda for Sustainable Development and the Paris Agreement on Climate
Change,  together  with  market, infrastructure and technology advancements
have  great  potential  to  shape  a  future  powered by clean, sustainable
energy.  However,  to  accelerate  the  transition  to  a  world  based  on
sustainable  energy,  and  to  address  the  aspects of quality of life and
uneven  distribution  of energy, we must deal with the long-term challenges
and opportunities.”

Dr.  Akhtar  emphasized  that  energy  supply  enhancements are critical to
address  existing  deficits  and  meet the needs of over 1.4 billion people
without energy access. She stressed that reducing dependence on fossil fuel
sources  is  also  urgent,  as the carbon budget to keep the world within 2
degrees of warming is dwindling.

Mr.  Bakhytzhan Sagintayev, Prime Minister of Kazakhstan, noted the immense
potential  nationally and globally for growth in GDP and employment through
growing  the  green economy. Mentioning the Kazakh proverb “what is sown by
fathers will be harvested by children,” he described energy as “crucial for
development”  and  noted the need for balancing sustainable development and
environmental  protection  as a commitment to future generations. The Prime
Minister  also  expressed  hope  that  the  Ministerial  Conference and its
Declaration   will   further  promote  the  long-term  cooperation  of  all
stakeholders on sustainable energy.

In  her  address,  Ms.  Olga  Algayerova, Executive Secretary of the United
Nations  Economic  Commission  for  Europe (UNECE), underlined the critical
need  to  close the gap between current actions and commitments on the 2030
Agenda  and  the Paris Agreement, and what is truly needed to achieve their
implementation.

Low turnout in Kazakhstan’s elections after call for boycott