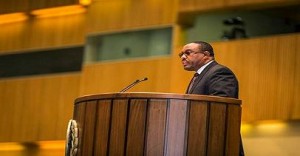 The Chairperson of the African Union Commission (AUC), Dr Nkosazana Dlamini Zuma, has charged African countries to improve the skills of the youth in their respective countries in science and engineering. She was worried that with an average of over 90% of graduates in social sciences, Africa’s innovation and scientific skills lag behind.

The Conference of Ministers is an annual event organised jointly by the Economic Commission for Africa and the African Union Commission.

Dr Zuma noted that with a burgeoning youth population, Africa has no choice but to look for solutions.

She also spoke on industrialization and economic diversification, the need to reduce import dependency, and creating regional centres of innovation.

Reflecting on harmonising and co-ordinating the different policies of the Sustainable Development Goals and Africa’s own Agenda 2063, Mr Desalegn urged African states to be “strategic, ambitious, rigorous and disciplined” if they are to achieve sustainable and inclusive development for their people.

On his part, the Executive Secretary of the Economic Commission for Africa, Dr Carlos Lopes, noted that Africa’s current growth has not generated sufficient jobs and has not been inclusive enough to significantly curb poverty.

He explained that fluctuations in the price of commodities on the world market have made such growth vulnerable.

Consequently, he tasked African countries to look into structurally transforming itself, focusing on the potential offered by industrialization.

“Transformation will not happen spontaneously, but rather as a result of deliberate and coherent policies that are entrenched into a coherent development strategy, enlightened by a informational leadership”, he emphasised.

The Prime Minister of the Democratic Republic of Congo, Augustin Matata Ponyo, views governments as having a crucial role to play in bringing about sustainable development.

“Many African countries are already on track with regard to transforming their economies. The role of governments in Africa is to offer inclusive and sustainable development, which is important in addressing climate change and economic growth”, he said.

Touching on the theme of leadership, the Vice-President of Namibia, Nickey Iyambo, told the conference that strong leadership is a prerequisite for fostering the continent’s development with healthy economies that grow and end poverty.

He encouraged African countries to learn from Namibia’s approach by cultivating the African spirit of self-reliance through a wise use of resources.

“Let’s take the torch in our own hand and develop our countries,” he said.

Beads possessed with spirits are myths not reality – Nana Ogyedom

Hyundai Sonata burns to ashes on the Tema-Accra Motorway

Zongo leaders urged to create opportunities for the youth

Murder of Ghanaians in The Gambia: Commission indicts Yahya Jammeh, 13 others

We have not declared support for King Kaku Aka – Nzema youth