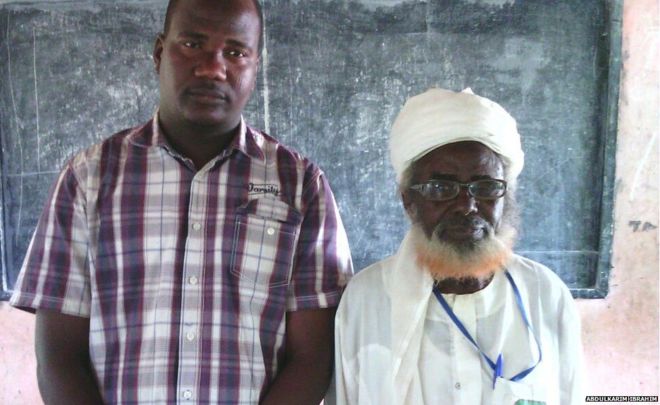 Mohammud Modibbo (R) pictured with his teacher in Kano

Mohammud Modibbo was unable to go to school as a child because he worked as a trader, travelling around the country.

He decided to enter primary school in his mid-80s and had recently begun secondary school in the northern city of Kano.

?During classes, he was very attentive and asked questions when he didn?t understand ? either asking the teacher or a student sitting beside him,? Mr Ibrahim told the BBC Hausa service.

Mr Modibbo had dreamed of pursing a university education, but his ?sudden death? had robbed him of that chance, the teacher added.

Initial reports put his age at 83, but his family says he was 94.

Mr Modibbo was an Islamic scholar who sat in school alongside pupils young enough to be his great-grandchildren, and even great-great grandchildren, says BBC Nigeria correspondent Will Ross.

Pupils and teachers at his school are sad they have lost the pupil who had so passionately embraced the motto: ?It?s never too late?, our reporter adds.

According to the Guinness Book of World Records the oldest person ever to have enrolled at primary school, was Kenyan Kimani Maruge at the age of 84.

He passed away five years later.

Many PWDs Dropped Out Of School