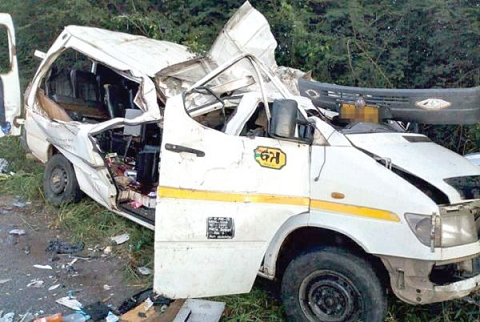 The Western Region in 2022 recorded 97 road accident-related deaths as against 112 in 2021.
In all, 709 road crashes involving 1,266 vehicles were recorded as against 907 in 2021, indicating a reduction in the number road crashes in the Region.

These were contained in an accident statistics report signed by Nana Akuah Ansaah Cobbinah, the Regional Head of the National Road Safety Authority (NRSA) and copied to the Ghana News Agency in Takoradi.

The report indicated that 568 persons were injured as against 728 persons injured in 2021.

Pedestrian knock-down, claimed 27 lives against 40 in 2021 from a total knock down of 227 in 2021 to 117 in 2022.
Mrs Cobbinah commended the media for their support in the activities of the Authority especially in road safety education

“We were able to make significant progress in the region as a result of your ideas, inputs and enthusiasm which assisted the Authority to make valuable Improvement.,” Mrs Cobbinah said.

The Regional NRSA Head called on all stakeholders to bring to bear their support, passion, and commitment to make the Western Regional road safety situation better for the collective good of the people.

Mother and son found dead at Adwenambantam in Western Region