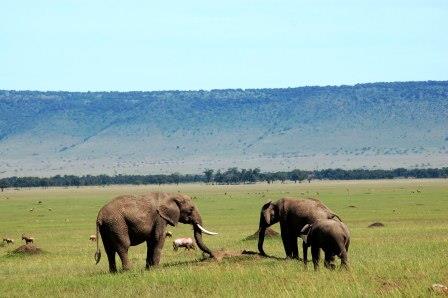 The animals move back and forth across the borders with no hindrances as the 1,442 square km tree savannah stretches out to the horizon.

The valley has two main rivers, Narus and Kidepo, which disappear in the dry season, leaving just pools for the wildlife. During the dry season, tourists can drive through the dry river beds. In the wet season, the story is different. The rivers can quickly fill to their banks in just hours, as they carry excess water from up the hills that ring the park.

The Ik, a hunter-gatherer ethnic group, whose survival is threatened and the Karamojong, a pastoral tribe are among the local communities near the park.

Before the park was gazetted back in 1962, a story is told of how the elders were the deciders of when hunting of wild animals should take place. It is this regulated hunting that ensured the survival of the animals before the onset of poaching in later years, according to Francis Wacal, a warden at the park.

Visitors to Kidepo have to brave a 700 km journey from the capital Kampala to enjoy the beauty of the flora and fauna of the park. One can also take a chartered flight to the park from Entebbe, 40 km south of Kampala.

Besides the breathtaking scenery, you get to enjoy the sights of about 80 mammal species ranging from elephants, lions, cheetahs and over 400 bird species. Lions and Ostriches are a major highlight on a trip to Kidepo.

After a three to four hour game drive, visitors retreat to the exquisite hotels in the park. These accommodation facilities range from luxury to budget, where one gets to swim and also enjoy a night camp fire as they listen to folk stories.

At the Apoka Rest Camp, there is a resident elephant named Bull Bull. The giant animal loves alcohol and can smell it kilometers away, according to guides at the park. Great care however has to be taken because when it gets drunk, it can be destructive.

The fire place is a great place to be before one heads to bed. The folk stories there are endless.

Uganda reopened its savannah national parks in June after some three months of closure because of the COVID-19 pandemic that broke out in the country on March 21.

The country’s tourism revenue dropped drastically, with government predicting that it may lose all the over 1.6 million U.S. dollars the country earns from the sector annually.

After putting in place the standard operating procedures, government agreed to the reopening of the parks. All tourists must adhere to the procedures if they are to visit any park. While the country’s Entebbe International Airport remains closed because of fear of importing COVID-19 cases, domestic tourism is on the rise.

Taddeo Rusoke, founder of Inside Africa Safaris-Uganda, told Xinhua in a recent interview that his firm has resorted to online campaigns to attract domestic tourists to destinations like Kidepo.

The managers of the park say that since the country started easing COVID-19 restrictions, many Ugandans are thronging the park unlike before when foreign tourists contributed a big percent of arrivals.

To boost the arrivals, Uganda Wildlife Authority, a state owned wildlife conservation agency, reduced the tariff rates to all parks in the country.

Namibia arrests two in poaching of 11 rhinos in national park