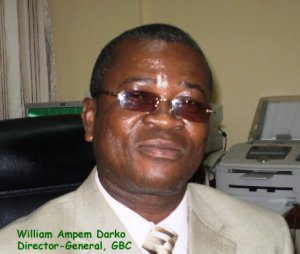 If the ongoing court proceedings regarding a GH¢2.4 million judgment debt case filed against the National Media Commission and the Ghana Broadcasting Corporation (GBC) by Mr William Ampem-Darko, a former Director-General of the state broadcaster, goes in the plaintiff’s favour, then the already-precarious financial situation of the state media house would be worsened, the Auditor-General has observed in his 2021 report.

In the view of the Audit Service, the judgment debt debacle was avoidable.

The audit said during their review of records at the Ghana Broadcasting Corporation (GBC) for the 2015 to 2018 audit, they noted that National Media Commission (NMC), being the appointing authority of the Director-General of GBC, appointed Mr William Ampem-Darko as the Director-General for a 6-year contract effective 2 July 2007 to July 2013.

“We further sighted a letter dated 15 March 2011 and signed by H.E. Kabral Blay-Amihere, the then-Chairman of NMC, terminating the appointment of Mr William Ampem-Darko, the then-Director-General, with immediate effect”.

The termination, the report noted, was 27 months before the expiration of Mr Ampem-Darko’s contract.

The Auditor-General indicated that records showed that Mr Ampem-Darko, in 2011, sued the NMC and attached GBC and obtained a court judgment of GH¢2,492,566.43 in his favour, of which the financial burden is on the state broadcaster.

The first and second respondents, i.e. the National Media Commission and Ghana Broadcasting Corporation, however, appealed against the decision of the court in 2020.

The audit team said they wrote to the National Media Commission on 29 June 2021, requesting the Commission to provide the Auditor-General with the basis for the termination of Mr Ampem-Darko’s appointment.

At the said meeting, the report said the Executive Secretary to the NMC indicated to the audit team that the Commission has appealed against the decision of the court and, hence, the Commission would continue to explore “all legitimate means” before the case would be finally determined by the courts.

The Executive Secretary, the report noted, also opined that the Commission did what was “constitutionally right within their remit in terminating the appointment of Mr Ampem Darko”.

The audit report said “GBC is likely to suffer the burden, should the court rule in favour of the plaintiff”, adding: “This would further worsen the delicate financial situation of the Corporation and may result in loss of resources to the state”.

“We urged the NMC and GBC to see to the speedy trial … to bring finality to the protracted case”.-Class

Television In The Era Of Digitization

Minister uncertain about financing road projects due to financial constraints