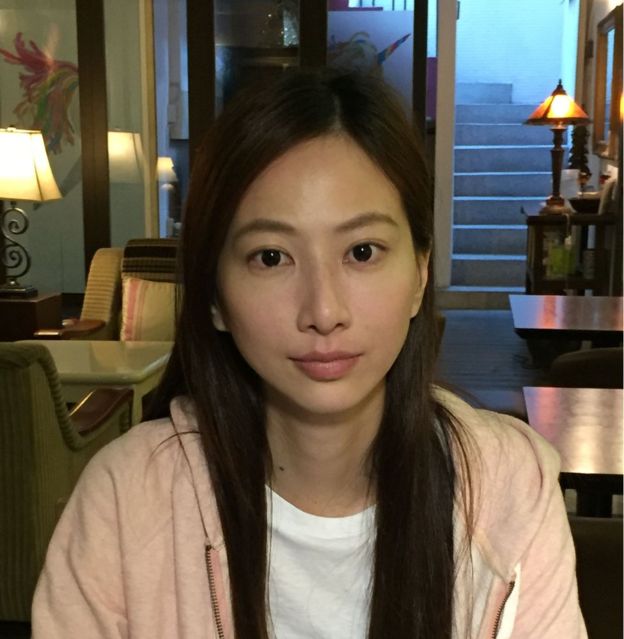 “I’ve broken down many times crying and I haven’t been able to sleep,” says Heidi Yeh, as she struggles to fight back tears.

“The biggest loss for me is I don’t want to be a model anymore.

“Just because I’m a model, people can hurt me like this and I can’t fight back. I just want to hide.”

‘You can’t hide it forever’

Her “nightmare” began in 2012 with a photo shoot for an advertisement aimed at convincing people to get plastic surgery at a Taiwanese cosmetic clinic. The photo showed very attractive “parents” with sought-after big eyes and long, well-defined noses, and their three “children”, their images altered to make their eyes look exceptionally small and their noses flat.

The caption read: “The only thing you’ll ever have to worry about is how to explain it to the kids.”

Ms Yeh says her contract, signed by her agency and the Taipei office of US-based international advertising agency J Walter Thompson (JWT), stated the ad would be used in newspapers and magazines, by that clinic only.

But JWT later allowed another plastic surgery clinic, Simple Beauty, to use it on its website; it also put the image on JWT’s Facebook page.

Before long, the photo made its way across the internet, with a new caption: “Plastic surgery – you can’t hide it forever.”

‘People thought it was real’

Then in 2012, a Chinese tabloid attached it to a fake story – which first emerged in 2004 – about a husband from Heilongjiang who sued his wife when he found out she had plastic surgery before they met, because their children grew up to look nothing like her.

“When I first heard about this from a friend, I thought it was just a one-off rumour,” said Ms Yeh.

“Then I realised the whole world was spreading it and in different languages. People actually thought it was real. Even my then-boyfriend’s friends would ask about it.”

The picture and accompanying stories came up on Google in several languages, including Arabic, English and Japanese, and have become a global meme.

Ms Yeh, who has shot TV commercials and ads for major companies such as fast-food chain KFC, computer maker Vaio and a Japanese facial products brand, began to get less work.

“People refused to believe that I had never had plastic surgery. Clients would ask me if I was the woman in the picture. After this, I only got small roles in advertisements.”

It also, she says, affected her personal life. She suspects her then-boyfriend broke up with her partly because he was embarrassed by the rumours. She says relatives and her current fiance’s family have also asked about them. Strangers would spot her in public and gossip about her, she adds.

Mr Yeh estimates she has lost $4m new Taiwan dollars (£80,000; $123,000) in potential earnings. She is threatening to sue JWT and the cosmetic clinic for NT$5m. She says her goal is not the money, but to clarify that none of the stories are true, and to get the companies to own up to their role in how her image was used.

Ms Yeh said she had tried many times, through her modelling agency or on her own, to get the clinic and advertising agency to remove the image from their online sites, but they didn’t until shortly before she, with the help of a Taipei city councillor, held a press conference this month where she made her threat to sue.

In a statement to the BBC, JWT said its campaign “was created to promote plastic surgery services in a humorous manner”, adding that it owns the copyright to the photo, and so has rights to edit, modify and use it.

But Ms Yeh’s lawyer, Chang Yu-chi, disagrees: “We gave you the copyright and the right to edit it, but we didn’t give you the right to let another company use it, and to use it online.”

Asked whether JWT tries to ensure its advertisements are not misused, the agency says: “As we all know, no-one controls the internet… We can’t anticipate what degree of an impact it will have, how people will view it, and what they will do with it.”

The clinic says it followed proper procedures to obtain the rights to use the image.

Both companies are threatening to sue Ms Yeh in turn for damaging their images and have demanded she hold another press conference to apologise. Some people, meanwhile, have suggested online that she’s seeking fame to re-launch her career.

But Ms Yeh says she is a victim of cyber-bulling, and that she decided to speak out to give herself courage.

As for the children, Ms Yeh and the little girl’s mother both said their images were edited to make them look less attractive. The mother told reporters her daughter was disappointed with how she looked in the photo.

Ms Yeh says she hopes the image stops appearing. “I can’t bear to look at it… The children may not use social media now, but it will hurt them when they grow up.”