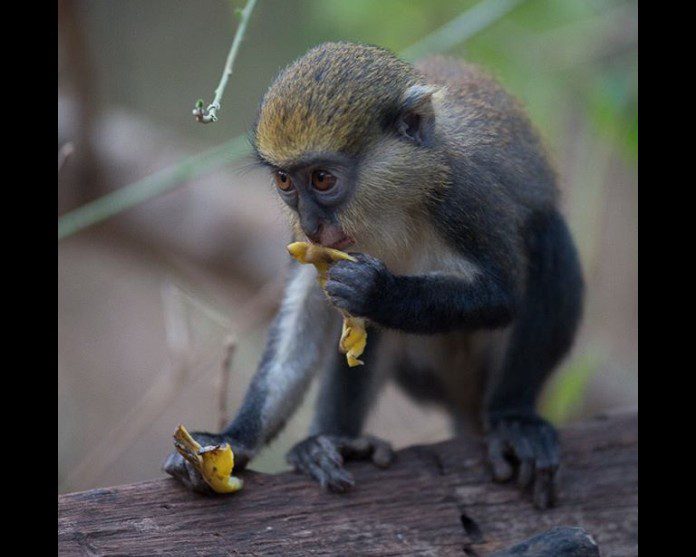 This journey on which we are embarking is catapulting us to one of the fertile lands in the Volta region which supports the growth of every food crop except banana.

The land is the home to the Tafi Atome Monkey Sanctuary and Cultural Village, one of the most popular tourist sites in Ghana.

Yes, the banana plant, although very economical is the dream produce of farmers in any part of the country for growth, but the monkeys which are the ‘land owners’ of Tafi Atome ‘laid an embargo on its cultivation.

Farmers here put themselves at risk with any plans towards the cultivation of bananas.

Mr Martin Fleku, an opinion leader disclosed to the Ghana News Agency (GNA) that the monkeys which have been in the community for over 600 years are considered sacred, therefore, not harmed but protected by the people.

“My grandparents said during their migration from Assin, somewhere in the Fante land, monkeys always followed them to their present stay so they see them to be sacred and always ensure their maximum protection. We do not kill them and we inform neighbouring communities too.”

He said the community used to patronise the site prior to it becoming “popular”.

There are more than 300 highly endangered True Mona and Patas monkeys that inhabit the forests together with many birds and butterfly species.

The site is a 47km ‘never a dull moment’ journey setting off from Ho, the regional capital along which you enjoy the ‘far away’ Mount Gemi and the beautiful greenly valleys and vegetation,

You would also come across foodstuffs such as mangoes, pears, pawpaw, cassava at Fume, a town forming an intersection of Hohoe to Ho and Hohoe to Kpeve route.

At this point, you would have halved your journey after close to an hour and half with the remaining half not going to be as smooth due to the bad nature of the roads with potholes.

From Logba Alakpeti, the site sits some 5km west of Alakpeti on the Accra-Hohoe Road. It is to your left hand on the Ho to Hohoe route and on the right when using the Hohoe to Ho stretch of the Eastern Corridor Road.

With the few speed rumps from Logba, the tarred road and ‘immature’ vegetation, greets and welcomes you to the Sanctuary.

In case you are using public transport, motor bikes will be at your service when you alight at Logba Alakpeti.

The monkeys may be seen in the early hours of the morning or during the latter part of the day.

Once tourists finish with the necessary registrations, they are led by a tour guide to various ‘sectors’ of the forests where monkeys, through a whistle from the guide, come out of their zones to their position for bananas which are either bought along by the visitors or provided for by the guides at the site.

‘Firmly hold the banana in your hand, stretch it to any monkey around who will then jump on you and peel the banana and sometimes relax to eat if you are not nervous.’

Tourists are allowed to take numerous pics and definitely, it is a nostalgic trip to make.

Lovers of fresh palm wine also get sorted out under a cool canopied shed in the town.

Gwen M. Murrell, a retired Chaplain from the United States of America, on her first visit to the site, told the GNA, she was impressed.

“I am impressed about the jungle itself, how peaceful, green and large it is as well as how the monkeys are friendly and numerous.”

Atome monkeys have a life span of 36-40 years and are divided into more than three troupes with leaders and a king named “Kakagbla” literally “Grandpa” which has four wives.

He ensures orderliness and no member of the various troupes dare disobey the king nor heads of their troupes.

The troupe heads move from one territory to another either by branch or land after spending a maximum of four hours at a territory.

The King makes an “uhum uum” sound to announce rotation of territories and respond by “am am am” from the troupe leaders to ‘acknowledge receipt’. Sounds from the king or troupe leaders depend on the situation at stake.

A monkey gets banished from its group for life if it falls while swinging from a branch to another.

Snakes and monkeys are enemies and do not reside in the same jungle.

You won’t see a monkey’s carcass because a member who gives up its ghost is carried by the troupe it belongs to and buried in a grave dug by their claws.

Troupe heads feed themselves first before any member and after feeding, they climb the highest tree to monitor and protect members while they feed.

He said the office got supplies of bananas from nearby communities for tourists since there was no cultivation of bananas in the town.

Tourists can stay in the village during the night and pay for services such as home lodging, feeding, and entertainment.

The Tourism Development Fund funded the upgrade of facilities at the site which was undertaken by A&B Construction Ghana Limited giving the Site a new look.

She noted that tourism was positioned as one of the strategic pillars of the transformation agenda of the government.

Data available to the GNA from the Volta Regional Directorate of the Ghana Tourism Authority revealed that the Tafi Atome Monkey Sanctuary and Cultural Village generated a total revenue of GH₵12,286.00 out of 1,662 total arrivals between January and December 2017.

The outbreak of the COVID-19 pandemic has affected all tourist sites including the Tafi Atome Monkey Sanctuary, thereby, reducing the number of arrivals and the revenue generated last year.

Safety materials are placed at the site with measures put in place to protect tourists and visitors who may visit the site.