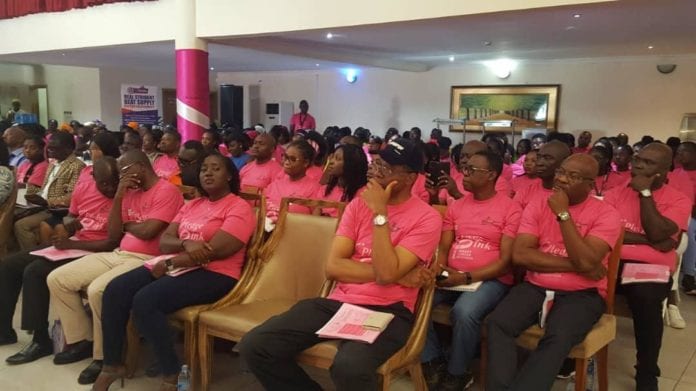 The Acting Managing Director of AngloGold Ashanti (Iduapriem) Limited, Mr Stephen Asante Yamoah, has stressed that the Mine would sustain awareness of breast cancer in its host communities to protect their men and women from the deadly disease.

He indicated that in 2018, it was reported that breast cancer cases in Ghana increased from 2,000 cases to 4,650 cases and most were diagnosed in late stages due to lack of awareness on early detection, denial and some barriers to health care delivery.

Mr Yamoah said it was for this reason that AAIL has in the past years embarked on an annual campaign on breast cancer disease.

The Acting Managing Director said this at Akyempim in the Tarkwa-Nsuaem Municipality when he addressed a durbar to commemorate the 2019 breast cancer awareness month under the theme “Tell breast cancer to step aside”.

AAIL launched the month long celebration on October 4, 2019 and proceeded to organize breast cancer education and free health screening exercises in their host communities, which were grouped into eight zones.

Mr Yamoah said about 2,100 women and school children have been screened, and two women whose condition were critical have been referred and being supported by the Mine to receive further medical care.

“Our employees and dependents have also not been left out and they will have the opportunity to undergo free breast cancer and cervical cancer screening from 28 to 30 October, in addition to the education and sensitization programme, which is currently ongoing in the mines” he said.

This year’s programme, he explained has been very successful because it had the full support and active participation of all their stakeholders, especially the queen mothers.

He emphasized that AAIL remained committed to working actively to mitigate health risk in the work place and also respond to community health issues in the areas where they operate, adding that, they would continue to count on the immeasurable support and commitment of all relevant stakeholders in realizing this objective.

Mr Yamoah expressed appreciation to the Tarkwa-Nsuaem Municipal Health Directorate and Hope for All Foundation, a Non-Governmental Organization for their effective collaboration and unflinching support in the breast cancer interventions over the years.

Mr Emmanuel Affelkum, Municipal Health Director of Tarkwa-Nsuaem, suggested that health facilities should be made breast cancer awareness friendly. “Over there, we expects that every male and female within the adolescent age who visits the facility will be given access to screening because we are talking about early diagnoses” he added.

He also suggested that an advocacy group should be established to consider the financial burden of those who have been screened and needed further medical attention.

“The advocacy group should also go to the traditional healers who claim they have medicine to address this issues, they need to be reached so that the public can know the knowledge gap level”