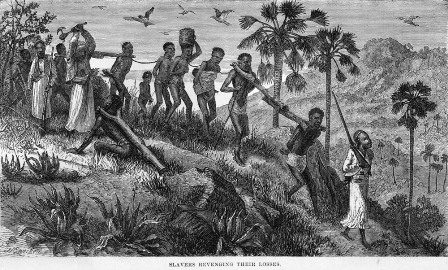 All over the World people, striving for peace and justice will commemorate the ?International Day for the Remembrance of the Slave Trade and its Abolition? -August 23. They are invited to ponder on its historic causes, methods and dire consequences in order to avoid the occurrences of such vile human acts now and in the future.

Indeed during the 15th through the 19th centuries (over 400 years) Europeans and North Americans exchanged merchandise for slaves along 5600 km (3500 miles) of Africa?s western and west central Atlantic coasts. An estimated twelve million Africans were enslaved and forcefully transported from their homelands in Africa to destinations in Europe and the Americas. They were subjected to such harsh and inhuman conditions that two million of them lost their lives during that journey. The remainder of them was, after arriving at their destinations, compelled to toil inhumanly hard and comport themselves in approved manners necessitating punishing them beyond civilized norms; because they were, simply, considered as subhuman.

However the uprising?of black slaves on the Caribbean island of Santo Domingo (today Haiti and the Dominican Republic), which began as a rebellion in the night of 22nd to 23rd August 1791 against slavery and French plantation owners, became a political revolution that lasted 13 years. It resulted in Haiti?s independence from France, so becoming the first independent black Republic in the world. Thisuprising set forth events which marked the beginning of the destruction of the slavery system, the slave trade and colonialism.

Hence August 23 was chosen as International Day for the Remembrance of the Slave Trade and its Abolition by the adoption of resolution 29 C/40 of the UNESCO?s General Conference at its 29th session. The Day gives us the opportunity for collective recognition and focus on the “historic causes, the methods and the consequences” of slavery, said UNESCO. It is important to acknowledge that the negative perceptions of persons of African descent, created by the Atlantic trade, have been difficult to eradicate over the years. Today many of the American and European nations are still struggling to overcome racism- a legacy of Atlantic slave trade as the recent cold blooded killing of Michael Brown, a young black man, on the 9th of August 2014 at Ferguson (Missouri) by a white police man of 28 years can testify.

Atlantic slave trade was a sad page of the history of humanity and August 23 each year provides the International Community the occasion to meet for a memory duty on it, in order to honour all the victims of four centuries of human tragedy, but also those who opposed and triumphed over this ?crime against humanity?.

The commemoration of this day should serve as a moment of deep reflection on the contemporary consequences of this tragedy and its implications in our society today, namely racism and racial discrimination, intolerance, but also all the modern forms of slavery, of exploitation and of human bondage. Though it will not be acceptable to put all the difficulties that Africa is encountering today as the consequences of slave trade; we cannot equally ignore its psychological and mental impacts on Africans who are, yet, to overcome them.

AASU appeals on its member and friendly organizations to use the occasion to embark on awareness campaigns on the horrible consequences of racism and racial discrimination, intolerance, but also the continuous exploitation and domination of Africa.

AASU calls, once again, on African leaders to nip their individual concerns and put an end to the artificial division of the continent by foreigners and unite it in the supreme interests of its people.

Never again to all kinds of slavery!

Down with racism and racial discrimination!