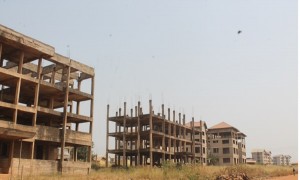 The Minister Designate for Works and Housing  Samuel Atta Akyea has hinted that all housing projects that were abandoned after the National Democratic Congress (NDC) took power from erstwhile Kufour’s administration will  be worked on.

He underscored that it is needless for the New Patriotic Party (NPP) government led by Nana Addo Dankwa Akufo-Addo to  start building new affordable housing units for citizens.

The Member of Parliament (MP) for Abuakwa South explained that building new ones is tantamount to abusing of State resources.

Speaking on Ultimate Breakfast Show hosted by Lantam Papanko, he pledged to ensure that  the housing deficit starring Ghanaians in the face is curtailed to a considerable rate.

He complained that it was wrong on the part of successive governments to abandon projects by their predecessors.

Mr  Akyea indicated that he will suggest to Cabinet to also continue with unfinished projects by the Mahama-led NDC administration.

‘A new government should endeavour to complete all the old ones, there have been instances,  where government started housing units, and there was a regime change and they will abandon it,… so I think with all respect that, I will recommend to cabinet that we should never start new projects unless we complete all the old ones and deliver them to the people of Ghana. If not its an abuse of resources, that we have had completed buildings scattered all over the country and we are doing new ones. we need to save money and make sure that  we put all the old houses in good shape and make people happy and then we can start new projects.  We need to rise up and clear the housing deficit,’ he said.

He said he will  act as a kindergarten to learn the nitty- gritty  relating to the Ministry, adding that he will add his expertise to help the government draft contractual agreements.

‘One of the things a lawyer has advantage over is understanding and preparation of contracts, there is no serious engagement which has not gotten contractual underpinning. .. We need to look at the contracts we will sign with contractors and bring punitive sanctions. If you are a contractor, we give you a job, there must be timelines, if you are not able to deliver, you pay for it,  and if you are unable to pay for it, we pursue you for the money. So that advantage of helping government craft documents, I will  be able to do it very well, and also be able look at issues of priorities,’ he promised.