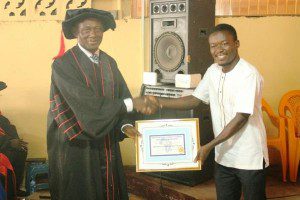 Multimedia Group Limited (MGL) journalist, Abednego Akwasi Asante Asiedu has received an honorary awarded from the Pan African Clergy Council and Bible Seminary (PACCBS) for his immense contribution in the world of journalism.

The award given to Abednego Akwasi Asante Asiedu, who works at Adom FM as a producer and reporter the organizers said is also for outstanding performance in News Production of Akan News in Ghana.

The ceremony also saw the graduation and ordination of four Reverend Ministers from the institution after going through training.

The Vice Chancellor of the Pan-African Clergy Council and Bible Seminary, Very Rev. Dr. Federick Akakpo charged the journalists to help fight corruption in the country.

Explaining the bases of the award, Very Rev. Dr. Akakpo stated that the award was given out to the journalists by the Pan-African Clergy Council and Bible Seminary based on their hard work in their line of duty in the media landscape.

After receiving the award, Abednego thanked the Pan African Clergy Council and Bible Seminary (PACCBS) for the recognition and urged upcoming journalist in the country to dedicate themselves to work hard for the betterment of Ghana and the African continent at large.

He also expressed his gratitude to Adom News Editors, the leadership of Adom fm and the entire Adom news team.

Abednego Asante Asiedu, a graduate of African University of College of Communications had his secondary education at the Pilot Training Centre (NVTI) where he acquired certificate in Auto Engineering.

Before joining Adom FM in June 2010, Abednego worked as a reporter for the Daily Heritage Newspaper, a subsidiary of Excellence In Broadcasting (EIB) Networks.

He did his internship at Adom FM and due to his hard work the management Multimedia Group Limited employed him as a Broadcast Journalist to its outfit.

Abednego loves to read, write stories and articles. As an enthusiastic writer, he has write a lot of stories for major news portals such as www.myjoyonline.com and www.adomonline.com

Due to his hard work as Broadcast Journalist, he has recently moved to Parliament as one of the Parliamentary Correspondent for Multimedia Group Limited).

He was born in the 1980?s at Nkawkaw in the Kwahu West Municipal District of the Eastern Region to Mr. Emmanuel Kofi Asiedu of blessed memory and Mrs. Comfort Akosua Owriedu.

Clergy advised to stick to teaching of unity