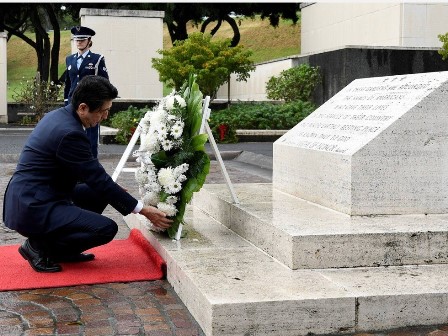 Japanese Prime Minister Shinzo Abe visited Pearl Harbor in Hawaii together with US President Barack Obama on December 28. Though labeling the trip a “symbol of reconciliation”, Abe offered no apology in his speech. 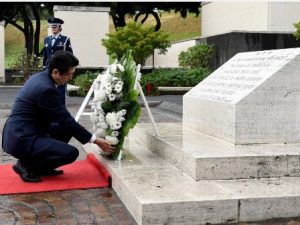 What’s ironic is that Masahiro Imamura, Japanese Minister of Reconstruction, offered prayers at the Yasukuni shrine which honors Japan’s war dead, including 14 Class-A war criminals from World War II, on the same day.

Lacking “sincerity”, an “astute show” was used by Western media to describe this visit. Abe’s diplomatic speculation in the name of historic reconciliation not only failed to blind the people, but also further triggered public criticism of his attitude toward history.

The veteran John Yee of the American Volunteer Group described Abe’s Pearl Harbor visit as “US-Japan theatre” in an open letter to the prime minister. Professor Takashima Shin of University of the Ryukyus further pointed out that the visit has once again humiliated the war victims in the eyes of their families.

Historic issues remain a headache for Abe since the right-wing politicians represented by him regard history as a constraint to Japan’s development rather than a responsibility it needs to shoulder.

Scholars pointed out previously that Abe has, in his works or dialogues with advisers, honored conservative policies to build the country into a “great power”. He, on many occasions, talked about the elimination of Yoshida Doctrine that places emphasis on economy over military, advocating for amendment of Pacifist Constitution.

In other words, to break free from history is a precondition for Abe to realize his political ambition. He will not even hesitate to cross the bottom line.

Abe has spared no efforts to break down “historic barriers” since taking office for the second time. For example, he raised questions about the definition of invasion at the National Diet in April, 2013.

What’s worse, Abe, in his statement marking 70th anniversary of Japan’s WW II surrender last year, claimed that future Japanese generations shouldn’t have to keep apologizing for the country’s role in the war. He even filtered out expressions in the speech such as invasion, colonialism, retrospection and apology which truly reflect the history.

Such deeds have proved that with its retrogress on the issues of history textbooks and Yasukuni Shrine visits, Japan shows no sincerity toward its historic responsibilities. It was never accepted by its Asian neighbors or even its ally, the US.

Japanese media have been packaging Abe’s visit to Pearl Harbor as a tour focusing on “reconciliation.” However, not all of Abe’s target audiences are buying it. The US media has questioned why did Abe skip December 7, the National Pearl Harbor Remembrance Day and set the date of visit at the end of this month? And why didn’t he apologize during his visit?

The answer to these questions is simple. The true intention of Abe’s trip was not to make apologies. His personal view of history and the Japanese rightwing politicians never allow him to offer apologies either.

It’s not up to Japan to decide whether the debt of history has been paid, which is a view not favored by Japanese rightwing politicians who are eager to escape from their responsibilities. However, it will be of no use for Japan no matter how many shows it puts on. For Japan, retrospection on its past is the only path to the future.