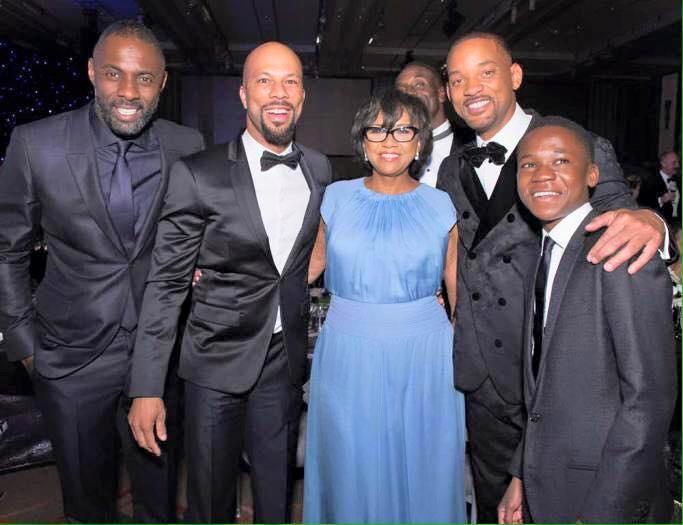 It’s safe to guess that Drake’s We Made It is the ringtone of child actor Abraham Attah. Why? Because he’s made it.

He is living the life that most people can only dream of: Flying in private planes? Lodging in 5-Star Hotels? Red carpet treatment? Hanging out with A-List celebrities? He has experienced all of that and more.

Recently, he was spotted chatting with Award-winning musician John Legend. We got a picture of him hanging out with Grammy-winning artistes Will Smith and Common early this week.

Common also won an Oscar for his song Glory with Legend .

Attah played the lead role of Agu  in the movie Beasts of No Nation, who when civil war tears his family apart, is forced to join a unit of mercenary fighters and transformed into a child soldier.

Abraham laid to rest reports about whether he was a street vendor or not before he was discovered for his role in the movie in an interview with The New York Times.

“People are saying I was a street vendor, but I’m not a street vendor. I was in school. We were playing football on our school field, and a white man was watching when I was playing. I thought he needed someone for the football team. He told us we should go for an audition. I was working hard for the role, so I got the role.” Idris Elba played the commander of the mercenary unit.

The movie premiered on Netflix and in selected Theaters in The United States of America on October 16. it was screened at number of prestigious film festivals including Venice, BFI London and Toronto International Film Festival.

It was directed by Emmy winner Cary Fukunaga.

Based on the 2005 novel of the same title by Uzodinma Iweala, it was partly shot in Ghana and also stars Ama K. Abebrese, David Dontoh and Grace Omaboe.