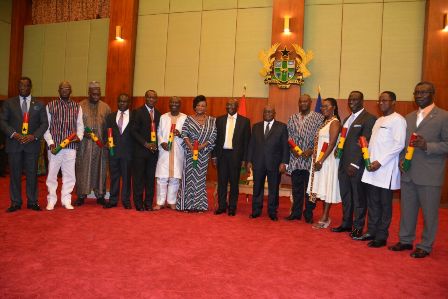 President Akufo-Addo’s penchant of breaching Ghana’s constitution is not likely to stop anytime soon, The aL-hAJJ can today report.

Painstaking investigations by The aL-hAJJ have revealed that, contrary to what many thought the president was yet to constitute his cabinet as required by the constitution; President Akufo-Addo, indeed, is already operating a large size “secret Cabinet” on the blind side of Ghanaians.

This revelation comes a week after this paper published how the President’s record “elephant size” 110 Ministers and deputies was skewed in favor of two of the ten regions of Ghana.

The aL-hAJJ can authoritatively report that President Akufo-Addo quietly constituted his “bloated and lopsided” Cabinet even before the last batch of Ministers were approved by parliament but, has purposely kept the list under wrap because it violates the constitution.

Intelligence picked by this paper indicates that the presidency may not publish the list of Cabinet Ministers any time soon as many, including Minority Leader in Parliament, Haruna Iddrisu and Member of Parliament for Builsa South, Dr Clement Apaak, would have wished.

A memo from the seat of government in possession of this paper detailing those among the 40 appointed sector Ministers President Akufo-Addo has named as Cabinet Ministers shows the list is bloated and skewed in favor of some regions.

While the 1992 constitution requires a President to appoint a maximum 19 Cabinet Ministers, President Akufo Addo’s Cabinet list contains a staggering 26 Ministers from eight out of the ten administrative regions in the country.

The Eastern and Ashanti regions top the list with 7 Cabinet Ministers each, followed by Northern region, 4; Brong Ahafo region, 3; Greater Accra region, 2; and one Cabinet Minister each for Volta, Upper East and Upper West regions. Central and Western regions have no representation on the list of Akufo Addo’s Cabinet Ministers.

This is contrary to what pertained in immediate past President Mahama’s government, which had 19 Cabinet Ministers coming from all the ten regions of Ghana. Under the Mahama administration, Volta region had 2 Cabinet Ministers, Greater Accra, 2; Eastern 3; Northern 3; Brong Ahafo, 3; Central, 3 and Western, Ashanti, Upper East and West regions had one Cabinet Minister each.

President Akufo-Addo’s unprecedented 26 member Cabinet runs contrary to article 76 (1) of the 1992 constitution which provides that “there shall be a Cabinet which shall consist of the President, the Vice-President and not less than TEN and not more than NINETEEN Ministers of State” which shall assist the president in the determination of general policy of government.

Despite hurriedly naming his Ministers and appointing Secretary to Cabinet, President Akufo-Addo is yet to submit the list of his Cabinet Ministers to parliament let alone, making it public; having being sworn into office almost four months ago.

Minority Leader in Parliament, Haruna Iddrisu and a Presidential Staffer under the Mahama administration, now MP for Builsa South, Dr Clement Apaak among other well-meaning Ghanaians; have been relentless in their calls on President Akufo-Addo name his Cabinet.

This, according to him, will enable Parliament to hold such ministers to respond to actions and inactions of government. Haruna Iddrisu said, “If for nothing at all, I want to know the status of my leader in Parliament (Osei Kyei-Mensah-Bonsu),” who is the Minister for Parliamentary Affairs.
To Dr Apaak, the president is “not a democrat” as it appears his “Cabinet does not exist”. He wondered why, four months into President Akufo-Addo’s tenure, Ghanaians do not know the ministers in the President’s Cabinet even though the constitution mandates the formation of a Cabinet.

“It is a constitutional mandate… Some have tried to argue that there is nowhere that the President is mandated within the context of timelines to announce his Cabinet, but similarly there is no timeline considering the prerogative to appoint ministers. But he has already done that, so why not complete the processes by letting us know… As at now there is no Cabinet. It does not exist because we have not been told,” the MP noted on Class Fm.

But Nana Boakye, a deputy Director of National Service Secretariat has not only established the existence of an Akufo Addo Cabinet, he indeed, confirmed “the President is hiding his cabinet” as stated by The aL-hAJJ.

Oblivious of the consequences of his defence and, believing he was refuting claims that President Akufo-Addo has not as yet constituted his Cabinet, Nana Boakye, on Metro TV’s “Good Morning Ghana” show recently “let out the cat”.

“We have a Cabinet…I have had like two or three meetings with the Minister of Education where he told me they are going for Cabinet meeting. For my Minister, my senior brother, Hon Mathew Opoku Prempeh they’ve been times where I have a meeting with him but he told me we should meet after Cabinet meeting. So there is cabinet,” Nana Boakye confidently stated.

The aL-hAJJ can confirm that President Akufo-Addo constituted his Cabinet before the last batch of Ministers were approved by parliament, but he is unable to make it public because other regions have no representation and it also more than nineteen.

Ghanaians urged not to abuse the Right to Information Act