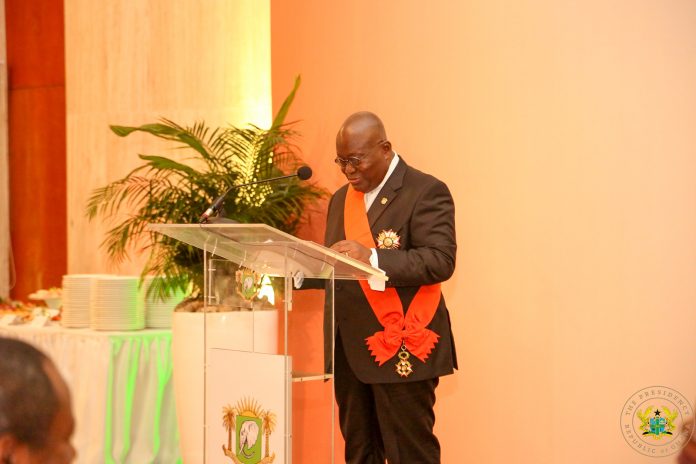 President Akufo-Addo has yet given the clearest indication that he has indeed constituted his Cabinet but has no intention to yield to demands by Ghanaians to make it public anytime soon.

Five months after being sworn into office, while some government officials have openly confirmed the existence of an Akufo-Addo constituted Cabinet, membership of the said Cabinet remained known to only the president and the Ministers.

The demand for the President to make public his Cabinet got to a head last week when he (Akufo-Addo) said he settled on his cousin, Justice Sophia Akuffo, as Chief Justice after consultations with Cabinet.

The President’s failure to “outdoor” his Cabinet five months after taking office has set tongues wagging with many referring to it as a “secret cult whose membership is known only to members of the cult.”

Prior to the official announcement of Justice Sophia Akufo as the new Chief Justice by the President, Accra based Joy FM reported that President Akufo Addo “after frank discussions with his cabinet last night at which other names such as Justice Jones Dotse and Anim Yeboah came up, the President made a strong case for Madam Sophia Akuffo.”

Deputy Director of National Service Secretariat, Nana Boakye had earlier stated on Metro Tv that the President had indeed constituted his Cabinet following which he appointed Secretary to Cabinet, Mrs Mercy Yvonne Debrah-Karikari on February 14 this year.

“We have a Cabinet…I have had like two or three meetings with the Minister of Education where he told me they are going for Cabinet meeting. For my Minister, my senior brother, Hon Mathew Opoku Prempeh they’ve been times where I have a meeting with him but he told me we should meet after Cabinet meeting. So there is cabinet,” Nana Boakye confidently stated.

The aL-hAJJ has been reporting that though the President has constituted his Cabinet, he is unwilling to make the list public because it is bloated and lopsided.
According to the paper, two regions, Western and Central, do not have a representation at Cabinet.

A leaked memo from the Flag Staff House in possession of The aL-hAJJ, which contains the list of Ministers appointed to serve on Cabinet, reveals that the Central and Western regions would have no representation at Cabinet.

Though Central region has two substantive Sector Ministers; Kwaku Ofori Asiamah, Transport, and Prof Kwesi Yankah, a Minister of State at the Ministry of Education whiles, the Western region also has two; Tourism and Creative Art, and the Minister for Railway Development, Catherine Ablema Afeku and Joe Nana Ghartey respectively, none of them made it onto the list of President Akufo Addo’s Cabinet.

Ghanaians have raised concerns that if there was nothing wrong with the list of Cabinet Ministers, the presidency and Ministry of Information would not have remained tight lipped on it despite incessant requests by the populace to know Ministers who have been nominated as Cabinet Ministers.