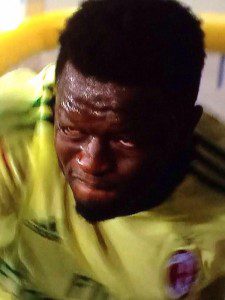 Muntari in fits of anger after he was substituted

AC Milan fans have launched a campaign to get Ghana midfielder Sulley Muntari out of the Italian club after his shirt throwing tantrum following his substitution over the weekend.

A Twitter hashtag ‘#MuntariOut’ has been started to force officials of the Serie A to ship out of Ghana international after throwing the club’s jersey in anger over his substitution.

The campaign is gaining ground particularly in the Arab world where Muntari derives most of his loyal fan base which means the anger over his actions are deep.

Muntari let his bad temper take control after he was substituted in the 55th minute during the Serie A match between Torino and AC Milan.

The 30-year-old reacted violently to coach Filippo Inzaghi decision to substitute him after he received a yellow card when his team are already down to ten men.

Muntari started throwing items furiously to the floor, showing his anger and disgust at being substituted. An act that will certainly put his future with the Rossoneri in question.

@acmilan #MuntariOUT he must get sacked about his attitude, he threw the kit if AC Milan, we need to throw him out of the club. #ACMilan

@MuntariOfficial Shame on you, You don’t deserve this shirt. #MuntariOut

#MuntariOUT what is this crap!? To say he was angry for the sub gets more retweets, likes, comments etc. He shows heart #MuntariGUTS ????

and @MuntariOfficial will try to injure Poli in next training to get more time to play, as he did to Van Ginkel. Shame on You. #MuntariOut