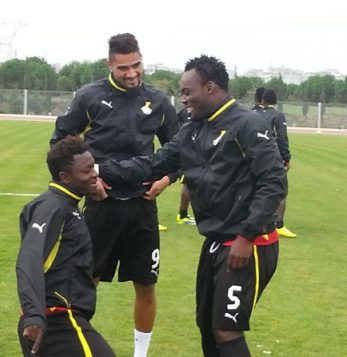 Ghanaian footballers have been completely wiped out by Italian giants AC Milan after the club owner Silvio Berlusconi confirmed the departure of Sulley Muntari and Michael Essien.

The Ghanaian duo were among the three top players from the West African country to have played for the Serie A giants in recent times which attracted a huge following in the football mad nation.

Their compatriot Kevin-Prince Boateng left AC Milan about two seasons ago and has been linked with a return to the Serie A after being axed by German club Schalke.

However, Ghanasoccernet.com insiders have confirmed that AC Milan will not hand Boateng an escape route from the nightmare at Schalke.

This means there will be no Ghanaian player at AC Milan next season unless something dramatic happens.

The full list of players leaving are named in the tweet below with Sulley Muntari, Adil Rami, Michael Essien and Mattia Destro four of the stand-out names.

Michael Essien and Sulley Muntari will both be familiar to Premier League fans after spells with Chelsea and Portsmouth respectively.

Former Blue, Essien will be playing in Greece with Panathinaikos, whilst Muntari is free to find another team.

After a disastrous 11th placed finish in Serie A last term, Milan are desperate to rise again under new boss Sinisa Mihajlovic, and have set about restructuring their squad with fresh investment.

Milan have already confirmed the double capture of Carlos Bacca and Luiz Adriano which is a real sign of intent from the sleeping giants.